It’s all fun and games until someone unleashes a pandemic

Earlier this week, a fringe group of self-styled “citizen scientists” announced an experimental do-it-yourself vaccine for Covid-19. The vaccine was tested on the group members themselves, raising serious ethical, professional, and scientific concerns regarding DIY science

TAGS:
In the prescient 2011 film Contagion, Dr. Ally Hextall, a virologist at the U.S. Centers for Disease Control and Prevention (CDC), injected herself with an experimental vaccine she was working on, thereby proving its efficacy and saving the world from a deadly virus. However, what Hextall, portrayed by award-winning American actress Jennifer Ehle, did in the film is in actuality dangerous, unprofessional, and unscientific. One would think that we would never see such an occurrence in real life, least of all by world-class scientists from world-class institutions. Yet, that is exactly what seemingly just happened, at least the self-experimentation part. RaDVac is a non-profit organization comprised of self-styled “citizen scientists” motivated to action by the effects of the coronavirus (Covid-19) pandemic, which, earlier this week, released instructions for a do-it-yourself (DIY) needleless vaccine. Led by biotech entrepreneur Preston Estep, the researchers at RaDVac, most of whom met at Harvard Medical School, admittedly took some short cuts in developing the vaccine. They even recycled some ideas, employing technology developed in the battle against diseases caused by other strains of coronavirus, such as SARS and MERS, to create their own open-source version of a vaccine for Covid-19. 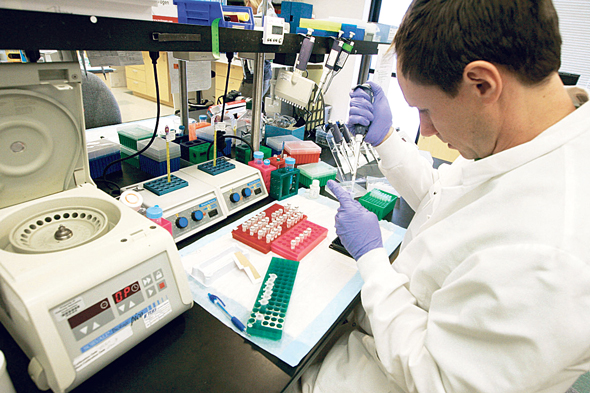 Working in a lab. Photo: Bloomberg

The researchers published a white paper and tested the vaccine on themselves, even before they fully established its safety and efficacy through standard animal models, as is the norm.

If the vaccine works, it would be a major coup for the DIY biology community that is well known for utilizing cutting edge synthetic biology tools in ad hoc garage-style laboratories, but is often considered on the fringe of institutional science, with members of this global biohacker community aptly described as subversive activists. RadVac is not the only DIY group interested in Covid-19. A Seattle-based community biology lab, for example, is working on developing cheap and accessible open-source coronavirus tests that can be shared worldwide. In another famous effort, an Oakland, California-based group called Open Insulin, which originated at the fittingly named Counter Culture Lab, has been developing its own cheaply synthesized insulin in response to the rising prices within the multi-billion-dollar insulin market.  But beyond the possibility of scientists harming themselves through shortcutting some procedural aspects of modern science, there is another very dangerous side to this world of mostly highly educated and well-meaning researchers. Unfounded rumors abound as to the original source of the SARS-CoV-2 virus responsible for the Covid-19 pandemic. Whether the virus evolved naturally or, as conspiracy theorists imagine, was developed as some sort of bioweapon, there has been a resurgence in the legitimate fear that similar pathogens could be engineered with especially pathogenetic qualities, potentially causing disastrous pandemics. One doomsday scenario, which now sounds a bit too familiar, has an anarcho-libertarian biohacker developing and unleashing, maliciously or otherwise, a dangerous microorganism incorporating DNA that makes it exceptionally pathogenic. The emergence of the seemingly easy to use CRISPR technology, utilizing DNA sequences found within the genomes of simple organisms like bacteria, has exacerbated this fear. Much of the emerging phenomenon of DIY biohacking takes place on an informal global online network and in communal spaces shared by tech enthusiasts, amateur biologists, hobbyists, and even professional scientists. More often than not, biohacking operates outside the bounds of standard limitations on laboratory research and ethics protocols developed by universities, large corporate labs, and the government. Typically, those safety and security protocols are enforced through the combined effect of institutional review boards, the risk-averse nature of academic and corporate entities, and professional peer interactions. Nevertheless, many biohacking communities do have their own, albeit unenforceable, codes of conduct and some communities even have congenial relationships with various national police forces. DIY biohacking has already raised concerns within the U.S. government. The Presidential Bioethics Commission even put out a report in 2010, the title of which is a dated nod to the pop culture phenomenon of the time, raising concerns regarding the community’s ability to evade safety and security in the name of curiosity. As discussed in a previous column, there has also been some more recent legislation that seeks to limit biohackers.  And while there have previously been a handful of outlier cases wherein mischievous individuals and small groups operating outside of institutional and, arguably, even the biohacker community norms, have pushed the limits, thus far, to our knowledge, nothing dangerous has occurred as of yet.

But it could. And it will most likely occur to those who dangerously experiment on themselves.

On the fringe of the fringe are experimenters that seek to modify and enhance one’s own body through inserting magnets, chips, and other devices under their skin. Sometimes known as Grinders, this loosely connected international community of enthusiasts circumvent nearly all the standard systems set in place to police ethically problematic experimentation and some of these transhumanists dangerously skirt the edge of safety.

The world now has the chance to learn more about both the Grinders and the less extreme DIY biology communities. Later in the month, Netflix is slated to release Biohacker, a fictional show that focuses on the biohacking community.

Designed to look scientifically realistic, albeit, with compressed timelines for dramatic effect, the show will introduce the regular viewer to the mostly underground world of biohacking. Although exciting in its own right and masterfully put together by German creator, writer, and director Christian Ditter, the show, which follows the various interactions between undergraduate medical students, biohackers, and a biopharmaceutical entrepreneur, also expertly raises many of the timely concerns related to the unregulated practice of DIY biology.

And, while it is unlikely that the citizen scientists at RadVac were influenced by the actions of Dr. Hextall from Contagion, maybe some budding DIY scientists might watch Biohackers and seek out responsible uses of their knowledge for the betterment of mankind. Hopefully, they will do so safely. Dov Greenbaum is a director at the Zvi Meitar Institute for Legal Implications of Emerging Technologies, at Israeli academic institute IDC Herzliya.