TAGS:
A hidden clause in the much-anticipated agreement to normalize Israel’s ties with the UAE states that in return for advancing diplomatic and commercial relations, the Persian Gulf powerhouse will be allowed to complete a huge arms deal with the U.S., Yedioth Ahronoth reporter Nachum Barnea reported Tuesday, citing American and Emirati officials. According to the report, the deal in which the UAE would purchase tens of billions of dollars worth of F-35 fighter jets, advanced UAVs, and more, which was long frozen due to Israel’s objections, is now able to go ahead. 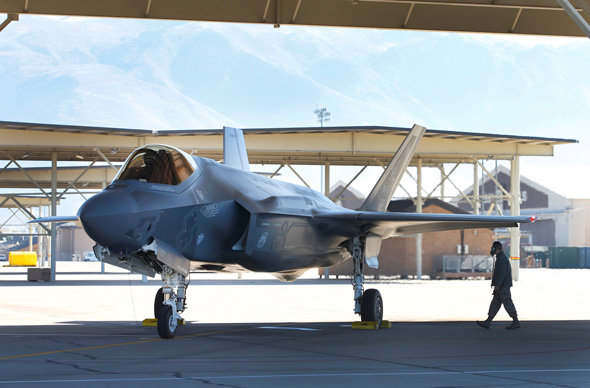 A Lockheed Martin made F-35. Photo: Bloomberg
When asked whether Israel was required to remove its objection to the arms deal as part of the negotiations, the Prime Minister’s Office responded that “Israel did not alter its position against selling balance-altering weapons and defense technologies to any Middle Eastern country.” The report, however, claims that not only was the arms deal part of the talks, it was a clause that the UAE’s leaders insisted on, with the country’s ruler stating that without it the agreement would not go ahead. The U.S. has long been committed to ensuring Israel’s technological edge in the region and for that reason, the U.S. Congress had placed an embargo on the sale of strategic weapons systems to Saudi Arabia and the UAE, even blocking a plan to do so by President Donald Trump.
Related Stories:
Barnea argues that establishing diplomatic ties with the key Middle Eastern state is worth it, even if the arms deal goes through, but took grievance with the way Prime Minister Benjamin Netanyahu reached the decision.

Chiefly, Barnea criticized Netanyahu for keeping the agreement secret, even from his political allies, specifically Defense Minister and Substitute Prime Minister Benny Gantz, the leader of the Blue and White party. Netanyahu, he wrote, explained that he was afraid Gantz and Foreign Minister Gabi Ashkenazi (also from the rival Blue and White party) would leak the details, putting the agreement at risk.

Barnea further slammed Netanyahu for not informing the defense establishment of the secret clause, arguing that Israel’s military and defense agencies must sign off on any deal that involves the sale of advanced weaponry to third countries. He noted that Netanyahu allegedly took the same route in the past when agreeing for Germany to sell Egypt advanced submarines.

The problem with Israel’s silent acquiescence to the arms deal is the precedent it sets, Barnea concluded. Other countries, primarily Saudi Arabia, may condition any step towards normalization on the removal of the embargo on the sale of the most advanced weapons systems in the U.S. arsenal.