When VCs claimed they couldn’t find female investors, these finance industry veterans started their own club

Orit Alperovitz and Inbal Polak were sick of being the only women in the room, so, they started a women-only investor club and are hoping to change the industry, one investment at a time

TAGS:
"We were sick of being the only women in the room,” Orit Alperovitz, co-founder and CEO of women-only Israeli angel investor club NEOME, told Calcalist. Alperovitz founded NEOME in 2017 together with Inbal Polak, who serves as its chief investment officer. Alperovitz served as a legal advisor for financial institutions and currently works mainly with the Edmond de Rothschild Foundation. Polak served as an analyst at Standard & Poor's (S&P) and later at Swiss multinational investment bank UBS Group AG. Currently, she also serves as a director at YRD Capital and an outside advisor for private equity firms and hedge funds. 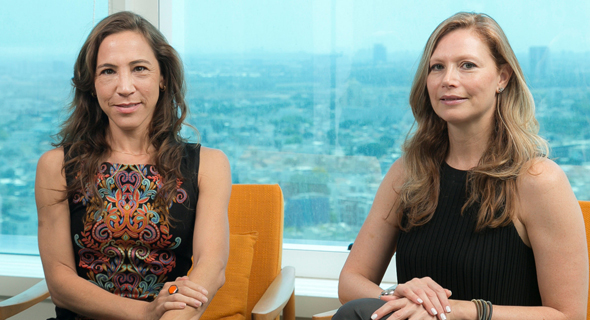 NEOME co-founders Inbal Polak (left) and Orit Alperovitz. Photo: Orel Cohen
NEOME was founded for the explicit purpose of getting more women actively involved in investments. “You can count on one hand the number of women who run funds we encountered throughout our careers,” Polak said, “95% of the people in this field are men.”

Even at the stock exchange, Polak said, 98% of clients were men who were responsible for the family fund, even when both spouses had equal knowledge of the market. “The same woman could choose to get very involved in buying an apartment but not in managing the shared funds,” she explained.

Before establishing NEOME, Polak and Alperovitz set out to examine whether the lack of women investors affects the companies as well. “We found a direct correlation,” Polak said, “especially with early stage startups as their first backers are often angel investors who choose to back someone who looks like them or a product they believe they would personally use.”

Even though they came into this very prepared, Polak said, the results of their inquiry still came as a shock. “Just 2% of all venture capital reaches female entrepreneurs,” Polak said. With tech startups, the numbers are even worse than in other fields, she added. When it comes to fashion, she explained, investors are more willing to assume a female entrepreneur knows the business and are more likely to invest. The main financial infrastructure of the tech industry is based on venture capital funds, so why not just establish a new fund?

“If we were to establish a fund, we would just have two women running it,” Alperovitz said, “but our goal was to get more women to assume responsibility when it comes to investment.

“With us, members get to choose and know why they chose this particular investment. In our talks with women, we realized many of them want to contribute from their experience to companies at the beginning of their journeys. We let them not only invest but take an active part in creating the company’s strategy.

“They get to live with the company, it is nothing like buying a share or a corporate bond on the exchange. The club lets each member choose in which companies and to what degree they want to be involved, from due diligence processes to joining the board.”

NEOME started out with seven original members, hand-picked by Polak and Alperovitz. Now, it has 50 members who have made five investments to date. All members meet once a month to discuss possible investments and some of them actively lead the club’s investments and maintain a direct connection with entrepreneurs.

“We’re not a small group of angels,” Polak said, “our investments are not made based on personal connections, it is a whole operation and networking can sometimes be worth more than another $100,000.”

"It is not just about making the best possible investment,” Alperovitz said. “We also wanted to see how we can make a difference. How, through this club and by pooling our money together to reach a significant sum, we can change the perception of gender equality and make the market realize that diversity is the right way to go and that it is important and starts from who your investors are. Investors are the people you sit down with early on to make your decisions, they are a part of the company’s DNA.

“We wanted to operate not by taking over and demanding changes be made but by helping companies understand that having female investors is good for them, that it can help them expand their thought processes.”

While investor clubs are organized and regulated entities, with rules determining who can and cannot become members, they are still a far less common funding source than venture capital funds and angel investors. Polak and Alperovitz, are also members of another investor club called Astia Angels, which exclusively invests in startups that have at least one woman in its leadership team. Astia prides itself with an average annual return of 28%, which is higher than that of leading venture capital funds, which normally do not reach 25%.

NEOME uses a screening method similar to that used by Astia, where, as a first stage, a network of 5,000 advisors from all over the world examines each startup that applies for an investment.

NEOME is, in many ways, a strange bird within the Israeli tech scene. Not only is it a female-only club, but it also differentiates itself as an investor club and not an angel group, which is far more common. Polak and Alperovitz view this as an advantage.

"At the end of the day, an investor is more about branding and what really matters is performance,” Polak said. “There are so many companies out there that grew without the support of a major venture capital fund. We have American companies that come to us after consciously choosing not to go down that path.”

"The Israeli market is a fund-based market as there are fewer angel investors here,” Alperovitz said, “but we feel that today, in a lot of places around the world, early stage companies cannot handle a venture capital investment.

“One of the reasons to choose not to go with venture capital firms is that funds have very specific models and criteria, while every company has its own path and process, which can sometimes take more time.

“If the company can get the money from other sources that can support it and open doors for it, as long as it doesn’t need a massive amount of money, this could be a real consideration. Funds sometimes have trouble dealing with companies that do not meet the criteria they set.

"When I invest in a team I believe in it and in its ability to face challenges and know when to ask for help. We are now negotiating a very big deal for a femtech company which is raising a series C round led in the U.S. by George Soros’ fund (Soros Fund Management LLC, H.R.). Until now, only family offices and angel investors have backed it. When we asked why the company said it just didn’t fit the venture capital model.”

"Venture capital funds tend to take over startups,” Polak said, “and entrepreneurs who have other ways to get the money they need, tend to avoid them.”

What does it mean when a fund takes over a company?

"It means being the ones to determine the business model, the pricing, who gets to join the team, it means taking over the helm in terms of the company’s management,” Polak said.

How do you get involved without taking over?

"You need to be sensitive about it,” Polak said, “we have had our fair share of unpleasant conversations with entrepreneurs and we did what we needed to do. We try to reflect and offer assistance.”

Before establishing NEOME, Polak and Alperovitz met with many people in the tech industry, including well-known investors, to figure out what the real needs were.

Did you ask them why they were not backing women?

“They told us there were no women in the field,” Polak said.

Asked if they heard stories of discrimination against female entrepreneurs, Polak and Alperovitz reluctantly said yes but preferred to share their own experiences.

“As part of our club meetings, we host events on new developments and we wanted to get an investor to give a talk on the mobility sector,” Alperovitz said. “We met with a senior executive at one of the Israeli funds. We weren’t there to ask for money rather just that he share information with us.

“He didn’t let us finish a sentence before he said, without even knowing who we were, ‘I invest in companies that are far beyond your capabilities, I invest in chips.’

“We said thank you and left. It helped us get a better understanding of how a female entrepreneur who was asking for money feels. We did have a lot of top industry leaders who were happy to come and talk to us.”

Did you tell this executive off?

"We were so surprised that we didn’t,” Alperovitz said, “but in another meeting with somebody else, we kind of did.”

"We’re not just starting out,” Polak said, “we are very confident about where we are and that is why it didn’t break us. What we took away from the experience is how much the industry needed NEOME.”

Cautiously and without naming names, Polak and Alperovitz discussed the gap between the local ecosystem and its counterpart across the sea. “When we approached people outside of Israel, even when we just started, we got quicker and warmer responses than we did here,” Alperovitz said.

“In other countries, women who are in leadership roles at funds are often also part of other investment organizations,” Polak said, “so the approach is less about a conflict of interest and more about spreading knowledge.

“In Israel, when we first approached the few female investors who were active in the industry, none of them was willing to join the club, saying they cannot be active in more than one place.”

How is the tech community treating you?

“At first, they didn’t know us, so, we didn’t get much love,” Alperovitz said, “but this has changed over the past year. Some doubted whether women would invest and some even warned us that they were ‘all talk,’ but we proved we know what we are doing.

“We often invest with funds and they see our process and what we bring to the table, so, now, they approach us to join in on the investment. We have also found angel investor groups that we are comfortable working with.”

Is it more difficult for you than it is for other people in the field?

“We are an investor club so we are not competing with venture capital firms for institutional money and we don’t secure commitments from provident funds,” Polak said.

“We are growing and becoming more of an organization than a group. The methods we use are in accordance with international standards, no less strict than those of any venture capital fund.

“We have more means and connections than a fund’s limited team and if we weren’t there for them, our startups would not reach the next fund stage.

“We are not a female entrepreneurship organization and our focus is not on the entrepreneur. We will invest in any company or team and if it is a predominantly male team, through NEOME’s investment, it will realize how important it is to give women a seat at the table. In some cases, male entrepreneurs who didn’t land an investment from us still called to let us know they appointed a female director.”