Radiology AI startup Aidoc raises additional $20 million for B round

TAGS:
Tel Aviv-based medtech startup Aidoc Medical Ltd. has raised an additional sum of $20 million dollars for its series B round, which now stands at $47 million, the company announced Wednesday. This brings the company’s total funding to date to $60 million. The round was originally announced last year and was led by Melbourne, Australia-based Square Peg Capital, with participation from Magma Ventures, TLV Partners, and Emerge. Joining the round now are Alpha Intelligence Capital and Maor Investments. 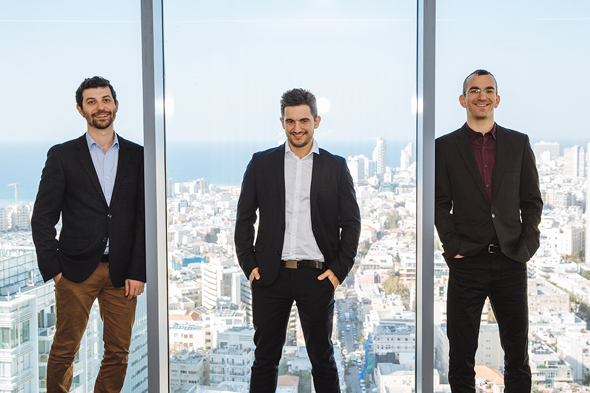 Aidoc founders Michael Braginsky (left) Elad Walach, and Guy Reiner. Photo: Guy Shreiver
Founded in 2016, Aidoc develops artificial intelligence-based medical imaging software designed to quickly analyze medical scans and help doctors prioritize the most urgent cases and expedite treatment. Aidoc has six products that have been cleared by the U.S. Food and Drug Administration (FDA) for flagging acute abnormalities in radiology scans including blood hemorrhaging, strokes, pulmonary embolism, and cervical spine fracture. In May, one of its already cleared products was approved for use to detect findings associated with coronavirus (Covid-19). According to Aidoc’s announcement, the company tripled its revenue since the beginning of 2020 and its technology is used by 400 medical centers in five continents, including five leading Israeli hospitals.

“The value AI brings in supporting radiologists is so obvious to us and Aidoc has stamped itself as a clear leader in the space,” Square Peg Partner Dan Krasnostein said in a statement. “Since our first investment, the company has continued to make giant steps forward with new products brought to market and a significant increase in the number of customers they serve,” he said. “Supporting a business that is improving patient care and saving lives on a daily basis is incredibly exciting,” he added.

“I am encouraged to see that recent changes in the healthcare world helped crystalize the value of AI,” Aidoc Co-Founder and CEO Elad Walach said in a statement. “As healthcare organizations work through case backlogs and prepare for a different future,” he said, “solutions that can show improved operational efficiency and increased revenue potential are being prioritized. Our solutions have augmented radiologists to provide the highest standard of care, reducing turnaround time, and helping save lives for over three years now and this funding allows us to continue expanding our comprehensive portfolio as well as facilitate our rapid expansion into additional practices across the globe.”