Why I think JFrog is such a leapin’ success

"There are great teams and there are huge markets and opportunities, but there is one JFrog," writes Boaz Dinte managing partner of Qumra Capital, one of JFrog's early investors

TAGS:
JFrog, Qumra’s second growth investment, is our second company to go public, and what an amazing IPO. JFrog’s IPO is one of the best software IPO’s ever. It received 21 multiple on revenue, which is the highest multiple any public software company received to date. If anybody had doubts about Israel’s ability to build world-class leading companies, that can scale and become multi-billion-dollar companies, then JFrog is proof that it is possible. Big time. While I had great confidence in the company’s future when we partnered in 2015, its stellar success is still amazing to me. There are great products and there a great teams, there are huge markets and huge opportunities but there is one JFrog. So, what makes JFrog so special? How did it become the phenomenal success story it became? 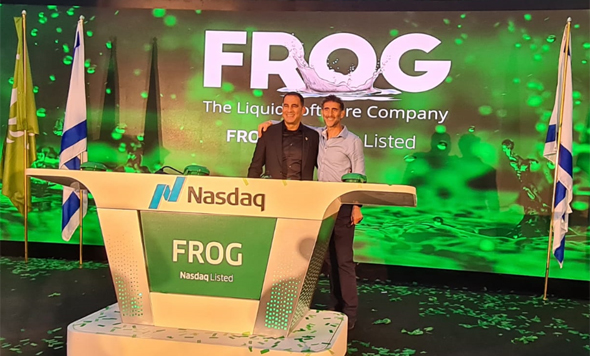 Boaz Dinte and Schlomi Ben Haim. Photo: Sivan Farag
From its inception, JFrog’s three Co-founders, Shlomi Ben Haim, Yoav Landman, and Fred Simon, were a terrific trio. To me, they are a great example that the whole is greater than the sum of its parts. Different from each other by skill and nature, they complement one another and just like family stayed together through thick and thin. Every founding team should be so lucky.

Very early, JFrog’s management understood the importance of defining its culture and the unique DNA of the company. At the core is communication and collaboration, crucial for success in globally dispersed teams. Each new employee signs an internal code of conduct that is continually revisited and written by the employees, ensuring a sense of personal commitment. Integrity, customer happiness, innovation, team spirit, open dialogues, care, and agility have all been named by employees as values to follow in the company’s code; the JFrog “Codex”. This is a great takeaway for many companies.

JFrog’s management never rested on its laurels. Always eager to do better, they were and still are on the lookout on how to improve JFrog’s offering and performance, and when it could not be done internally in the time frame required, they bravely took the inorganic route. To date, JFrog made five global acquisitions, including two Israeli companies, and despite the cultural complexities, managed to retain the unique JFrog DNA.

Open to opinions, Shlomi the CEO always kept an open dialogue with the board members, learning from the experience and perspective of others. Ego was never part of the game. It was simply about bringing software utopia to the DevOps world, about building a world-class company, and becoming one of the largest software companies. It was about developing and growing as a management team and rising to the changing challenges, and this is core to their success.

Israeli born and raised, Shlomi kept Israel close to his heart even when moving to the Valley and raising money from US funds. Once a year, Shlomi insisted to hold a two-day board meeting in Israel. The company’s board would make the trip to Israel to meet with the extended team and spend a full day visiting historical sites in the country. This was extremely important for Shlomi as he not only wanted the board members to become familiar with the company’s roots but also to see and experience what the country we live in has to offer. In that sense, Shlomi is not just a great ambassador for Israeli tech, he is also a great ambassador for Israel in general.

With over 600 employees in seven different geographies, Shlomi never forgot how it all started. From the beginning, every year he brought together the employees and investors, including the first angels that placed their faith in him when raising capital from funds was impossible, to a special evening that “gave back” and celebrated the company’s growth. Numbers and projections were transparently presented, laughs and meals were shared and every year the evenings ended with a special token of appreciation, the JFrog way. I may never have to buy another T-shirt in my life.

Driven to build and manage Developer Relations and Community Engagement, JFrog founders Fred and Yoav authored the “Liquid Software” book, bringing insights from more than 50 years of collective experience in building software in the modern development environment. On a personal note, I always admired the broad representation of female executives on the management team and recently also on the Board of Directors. For JFrog, employing a diverse workforce is not about affirmative actions, it is about truly understanding that this is a commercial benefit. A pluralistic, inclusive, diverse team will create a competitive advantage through its variety of perspectives in addressing the market. JFrog got this and “walked the walk” right from the start.

In the end, it is always about people and about hard work. A lot of hard work. JFrog’s story is about a special group of people that looked the challenge in the eye and worked extremely hard to address it. The company’s early days were a far cry from a $4 billion company on NASDAQ but the Frogs were determined, passionate, and would not give up. I feel privileged to have joined them for the journey and excited to see what leap they will take next.

Boaz Dinte is the Managing Partner of Qumra Capital