Co-founder Nimrod Vax says the company didn’t really need the money, but excellent terms by investors offered them a chance to leap ahead of the competition

TAGS:
BigID Inc., which develops online privacy protection tools announced on Wednesday that it has completed a $70 million series D financing round at a valuation of upwards of a billion dollars. The latest round was led by Salesforce Ventures and Tiger Global with participation by Glynn Capital and existing backers Scale Venture Partners, Bessemer Venture Partners, and Boldstart Ventures. The deal included primary and secondary share purchases. This is the company’s third financing round in slightly over a year, after its series C round was doubled within four months, bringing its total capital raised to $220 million. 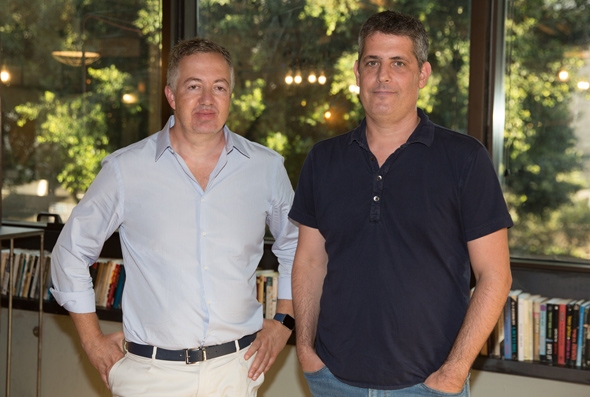 BigID co-founders Dimitri Sirota (left) and Nimrod Vax. Photo: BigID
BigID was founded in 2016 by Dimitri Sirota and Nimrod Vax and operates out of offices in New York City and Tel Aviv. The company developed a data protection platform to manage and enforce data privacy policies in accordance with regulatory demands and strict new guidelines such as those issued by European or California laws. The technology developed by the company makes use of machine learning capabilities that enables rapid detection and monitoring of private data. “This is our third round of funding in a little under a year and all of them were not initiated by us, the investors approached us,” Vax, the company’s co-founder and chief Product Officer told Calcalist. This time, with Salesforce Ventures, we are dealing with a strategic investor that decided to increase its investment significantly in light of the pandemic. The Covid-19 outbreak actually increased the interest in privacy issues, in part because of the headlines it made in regards to maintaining public health. As a result, and because the company had already established itself as a leader in this relatively new sector, investors see us as a promising foothold in the game.”
Related Stories:
After two consecutive rounds of $50 million, do you even need the money?

“No, not immediately. We didn’t use most of the money we raised over the past year, but we agreed to take it because the terms we were offered were attractive and it allowed us to increase our lead ahead of the competition, especially during a global recession. It also allowed us to invest in R&D, open up a technological lead, and enter new fields, such as data management. Many organizations don’t know what data they collect and through the prism of privacy protection, data discovery has become a cornerstone for many enterprises. With the new capital, we will expand our array of products into new areas and turn to new geographic markets and new verticals.”

We have been hearing a lot recently about the regulatory activity when it comes to privacy and the use of data that aims to rein in the tech giants. It is all well and good to address the issue in large enterprises, but meanwhile, the ‘Big 5’ continue to do whatever they want.

“The big companies will eventually be handled. If there are five companies that are duopolies or monopolies in their industries, it may be true that they are evasive and difficult to manage, but they are also under the spotlight and I believe that the regulators will handle them. But there are thousands of other large companies that use private data all the time. It’s not even about enforcement, but about allowing them to better get to know the data they collect in order to derive more value from it and also to better protect it. We enable them to manage the data in a better, more efficient, and more responsible manner. Our clients don’t just want to ‘check the regulation box,’ they appreciate the value of receiving insights on the data that helps them protect it, and most companies aren’t cynical about their treatment of it. They genuinely want to show their clients that they care. I don’t think there is a conflict between the companies and the law.”

We witness the legislation efforts in other countries, but it seems that Israel is falling behind.

“Israel is stuck in the 1980s, apparently lawmakers here have different priorities, But Israel will have no choice but to follow the European footsteps. It is already headed in that direction. Europe defines which countries possess laws that support their privacy protection requirements and Israel still meets them, but if it doesn’t advance privacy protection legislation, it won’t last. Things like the right to be forgotten or management of data use consent. In the U.S. we are seeing a different orientation, where their considerations have more to do with competition than ethics. While in Europe the issue of privacy is seen as a moral issue, in the U.S. it’s treated as a consumer’s proprietary right to the data. Nowadays, every large company has clients all over the world, so everybody will eventually have to align with each other. I am certain that with the new administration in the U.S. it will be a high priority.”

When it comes to countries’ handling of the pandemic, we saw that in many cases public health concerns overshadowed privacy concerns, definitely here in Israel. Is it possible to protect public health while still ensuring citizen’s privacy rights?

“It is possible to do both. Whether you choose to surrender your privacy or not, it is clear that awareness of privacy issues and the willingness to relinquish it, whether for health reasons or commercial reasons, has increased. Consumers’ decisions will likely be influenced by their surroundings. We saw that most people were willing to surrender their privacy and sign up for various applications, but people don’t realize that it can be done in a way that is less intrusive. There is no problem in being monitored as long as you granted your permission and know what purposes it’s being used for, that the tracking is only used to protect the public and not, for example, to determine your insurance premium. You can do anything provided you get permission and provide transparency in return. These are the major challenges of organizations that often don’t even have the tools to protect themselves. That’s where we come in, to help them grant their customers transparency and the ability to choose.”