TAGS:
Unlike the world’s air forces, which were quick to integrate drones and other unmanned aircraft, the more conservative navies have yet to embrace the autonomous vehicle revolution.

Israel’s Elbit Systems first unveiled its unmanned maritime vessel, the Seagull, which is capable of locating and neutralizing sea mines, engage in anti-submarine combat, and carry out patrol and reconnaissance missions, four years ago. Like in the air, autonomous sea vessels are far cheaper to operate, can complete longer missions, and don’t put human life at risk, compared to vessels that have a crew. The Israeli navy has leased Elbit’s system for experimental purposes but has yet to announce a purchase deal. 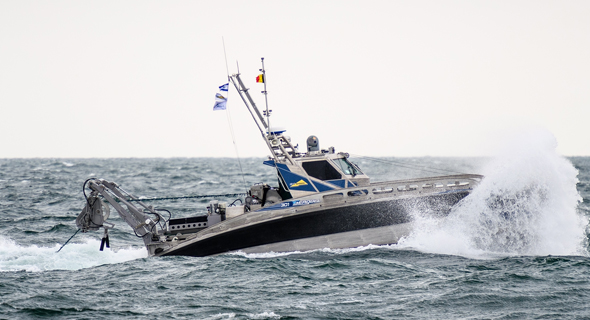 On Wednesday, Elbit announced the first-ever sale of its maritime system to a foreign military — an undisclosed country in the Asia-Pacific region. Elbit did not announce the deal’s value, but experts estimate that it is in the range of several tens of millions of dollars. The contract will be completed over a 17-month period.

The client purchased the mine-neutralizing model of the vessel, which comes equipped with forwards and sideways aiming sonar sensors, mine destruction capabilities, a combat management system, and satellite communication equipment. The Seagull is capable of remaining at sea for four days straight and in level five sea conditions, meaning with winds of up to 40 km/h and 2-meter high waves.

The Seagull has participated in several joint military, anti-submarine, and mine exercises, including with the British and Spanish navies. Elbit has also showcased its missile firing capabilities in order to increase its operational capabilities.