Dissecting the data-sharing deal: Should Israelis be worried about Pfizer getting private info?

Israel truly has an opportunity to be a light unto the nations by helping everyone else optimally distribute their vaccines in their own jurisdictions, but at what cost?

Nearly 10 days after the Prime Minister revealed what many had already suspected, that he had struck a deal to use Israel as a testing ground for testing vaccination and herd immunity strategies for the rest of the world, the actual redacted contract was finally released. Thus far, it seems Israelis have significantly benefited from whatever the deal was, as this small country has been able to vaccinate an outsized percentage of the country compared to every other country on the planet. The rest of the OECD is sorely behind.

Not all of Israel's success can be chalked up to this agreement. Israel was also supposedly relatively early in its efforts to secure vaccines from Pfizer and Moderna, although reportedly at a higher price than other nations. Moreover, Israel has been able to efficiently distribute the vaccines to vaccination sites throughout the country in usable batches through the various HMOs. Further, while somewhat strict in the official instructions regarding which demographics can sign up for vaccination, the same HMOs have been lax at the end of the day, preferring to vaccinate anyone rather than destroy valuable samples. 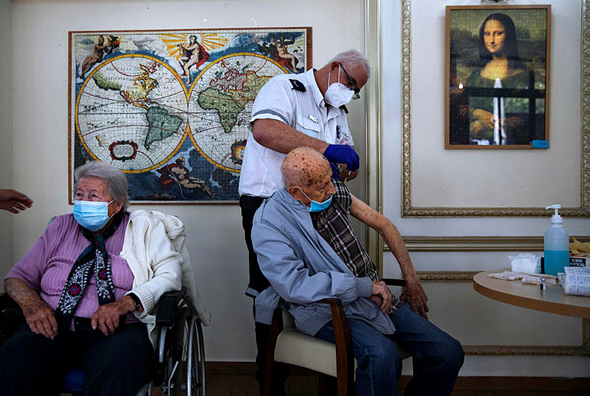 Israelis being vaccinated at an old age home. Photo: AP

Regardless as to whether you like the Prime Minister or not, Israel truly has an opportunity to be a light unto the nations by helping everyone else optimally distribute their vaccines in their own jurisdictions. The data culled from Israel may be particularly valuable to Pfizer, and may set a precedent for further lucrative deals: Israel has a relatively well-kept digital health record system that has for decades tracked citizen's and resident's health through mandated health insurance. This should be a good thing, right?

Moreover, the agreement, which is entitled 'Real World Epidemiological evidence' is a groundbreaking effort to employ what is known as Real World Data (RWD), seemingly not just the staid and immaculate data from standard trials that is not actually reflective of the real world. Not only would the implementation of the current vaccination data help the world at large during COVID, but it could also help pave the way for other large RWD clinical trials. RWD can be a very useful tool in the future of drug trials, allowing for more diversity in patient types and more opportunities to gather useful data vis-à-vis efficacy and safety.

The entire vaccination program here in Israel has upset conspiracy theorists and those who misunderstand the mechanism of the vaccine. However, the aforementioned agreement has especially raised the ire of many regular Israelis, although it's not clear why: The local HMOs were collecting data on the population vis-à-vis the vaccination anyway, just like they collect other types of health related data, perhaps even sharing that data as well. The vital difference is now, like all of our devices, social media platforms and email software already do, the government is overtly sharing the data with third parties, i.e. Pfizer.

It's even harder to accept those that suggest that the government was acting secretly against our collective best interests. The agreement, the redactions notwithstanding, has a number of sections devoted to the publicizing of the nature of the contract, both through public announcements and through peer review publications. None of this seems to have been intended to be kept secret. Moreover, the contract, as disclosed, clearly states that the data presented to Pfizer will be de-identified and represent only aggregate information. And, that the parties will abide by Israel's privacy laws, patients rights law, health laws, and all regulatory requirements. Further, the nature of the "experiment" is not vaccine efficacy per se, but rather the more broad questions relating to the deployment of the vaccine, and how that deployment creates immunity within the larger population. The government isn't testing the vaccine on us, its collecting epidemiological and technical data on a population level, much of that data is already distributed to the public regularly.

Still some might be apprehensive about the disclosure of the agreement. In particular, whether this deal struck with the pharmaceutical companies to get seemingly more than our share of vaccines before everyone else on the planet, will result in increased anti-Semitism, especially as citizens of other countries begin to realize that they may not have enough vaccine to fill their own demands.

Another concern that some Israelis might express is that Pfizer will clearly profit off our data. A similar situation occurred with the Google-associated DNA testing company 23andMe. They too faced similar backlash when the company started developing deals with pharmaceutical companies to leverage the data it collected from its customers for drug development, especially when a 300 million USD deal was announced with GSK. That should not have come as a surprise to those customers who signed away the right to profit off their data when they signed up for the service.

Another concern, likely to be raised by Israel's Central Helsinki Committee will be the lack of informed consent. Although notably, this was not an oversight. In the contract itself, Israel warrants that the Ministry of Health "has determined that no IRB or privacy board approvals are required."

To some degree, whether Israel is correct in its assertion might depend on the exact nature of the data demanded by the contract. Especially whether that data, and the end goals of Pfizer, have the characteristics of human-subjects trials that would seem to require the approval of an ethics committee. The contract is vague as to the granularity of the data provided. Perhaps a close analogy to what Israel is doing is a non-interventional Phase IV clinical trial. In such trials, doctors in clinical settings collect additional data on efficacy and safety of an already approved drug for standard patients. In these cases, medical societies deem informed consent to still be necessary. In Europe, such trials are legally distinct from other clinical drug trials and are often unregulated. However, the analogy is not exact; the data collected for the particular contracted deal with Pfizer does not seem to be looking into the efficacy and safety of the vaccine, although Israel may be collecting that as well. We are already provided informed consent for those considerations when we sign up and when we receive the shot. So what then will the Helsinki Committee demand? Perhaps simply to grant each Israeli the autonomy and the right to choose whether or not to share their data with Pfizer.

Ultimately, it's unclear whether a negative letter from the Helsinki Committee (or a broad opt out by the population) will be considered a breach of the contract that notes that it could terminate if an investigation against the government vis-à-vis this agreement will have a 'material adverse effect' on Israel's ability to fulfill its obligations.

Coincidently, Israel is not the only one suffering the ire of its constituents after disclosing what everyone already knew it was doing. Consider WhatsApp, the mass exodus from which has caused spikes in downloads of alternative messaging platforms like Signal and Telegram.

The Facebook owned WhatsApp with two billion users globally announced that it updated its privacy policy (now scheduled to be implemented in May), and that while it has been sharing some data with its parent Facebook for some time, it will now begin to also share payment and transaction data. WhatsApp messages between merchants and their customers, which were effectively invisible to the corporation because of end-to-end encryption will also now be able to be stored on Facebook hosted servers and mined to help Facebook advertising. This new sharing seems to go against the promises Facebook made to WhatsApp users when it purchased the company in 2014.

Ironically, the news, rumors and conspiracy theories swirling around the country regarding this deal were probably shared and promulgated through chats on WhatsApp and Facebook on mobile devices; all companies that clearly are in the business of selling your personal data to third parties.