The Israeli unicorns will hit U.S. public markets in the coming weeks after their mergers were approved by their respective SPACs

TAGS:
Israeli unicorns Payoneer and ironSource are coming to Nasdaq and the New York Stock Exchange in the coming weeks after their mergers with their respective SPACs (special purpose acquisition company) were approved. Payoneer will begin trading on Nasdaq at an implied estimated enterprise value of approximately $3.3 billion, while ironSource is set to enter the NYSE market at an $11 billion valuation. FTAC Olympus Acquisition Corp. announced that FTOC shareholders voted to approve the proposed business combination with Payoneer at its Extraordinary General Meeting held on Wednesday. More than 97.8% of the votes cast at the meeting voted to approve the business combination. Holders of approximately 65% of FTOC's issued and outstanding shares cast votes. 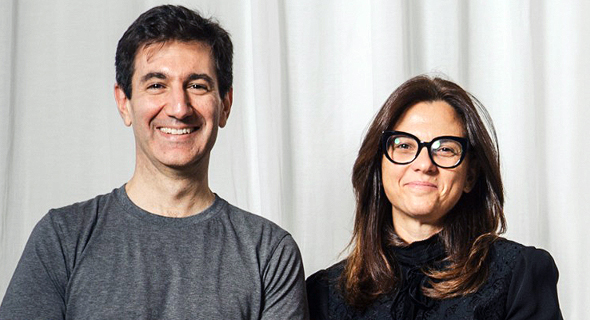 Payoneer's Scott Galit and Keren Levy. Photo: Tommy Harpaz
The combined company will be named Payoneer Global Inc., and its common stock and warrants is expected to begin trading on the Nasdaq stock market under the ticker symbol “PAYO” and “PAYOW”, respectively. “We are thrilled with the overwhelming support from our shareholders, and also pleased that we’ve received all regulatory approvals needed to close the transaction. We look forward to supporting Payoneer as it enters the public markets,” said Betsy Cohen, Chairman of the Board of Directors of FTAC Olympus Acquisition Corp.
Related articles:

Thoma Bravo Advantage announced that its shareholders approved on Tuesday the proposed business combination with ironSource. More than 96% of the votes cast at the meeting voted to approve the business combination. Holders of approximately 86% of TBA's issued and outstanding shares cast votes at the Extraordinary General Meeting.

The combined company will retain the ironSource Ltd. name and is expected to begin trading on the New York Stock Exchange under the new symbol "IS" on June 29, following the close of the business combination, which is expected to take place on June 28.

ironSource executives. Photo: Adam Primer
"Through their overwhelming support, our shareholders recognize the unique combination of scale, business growth, and profitability that ironSource offers and the value Thoma Bravo Advantage provides through its deep operational and investment expertise in the software sector," said Orlando Bravo, Chairman of the Board of Directors of Thoma Bravo Advantage, as well as a founder and managing partner at Thoma Bravo. "We look forward to supporting ironSource as it enters the public markets and furthers its leadership position as one of the fastest-growing and most innovative platforms for building and scaling businesses in the App Economy."
Buzz