A diamond in the rough: The story of SimilarWeb founder Or Offer

“I'm really a Cinderella story," says Offer, who got started in business with his parents’ jewelry stores and now heads a company worth $1.8 billion. “You want to quit ten times along the way, but you can not because you know you have to get to the finish line"

TAGS:
On the face of it, SimilarWeb's story may sound just like another familiar story about an Israeli high-tech company that completed a massive IPO. The office of founder and CEO Or Offer looks just like any other office of a successful executive during local high-tech’s current heyday. However, on the 40th floor of the Azrieli Sarona tower, on Offer’s desk, lies one item, a book on jewelry design, which implies: this story here, is different. "My parents are artists, they are jewelry designers," Offer explained. "All their lives they fought hard to support me and my two little brothers because it is a very unstable career. So immediately after I was released from the military I wanted to help them, and I set up two stores, in Zichron Ya’akov and Netanya, to sell their works and an online store that was supposed to be our highlight. I wanted to build something big, inspired by jewelry empires from abroad or Michal Negrin in Israel. My parents were very skeptical and at every Friday night meal they told me, ‘Or, there is no money in jewelry, go to high-tech,' and I said, 'Look at Magnolia, look at Pandora.' Back then they may not have been great, but today they are empires. Pandora (an international Danish jewelry maker) is already trading at a value of $14 billion." 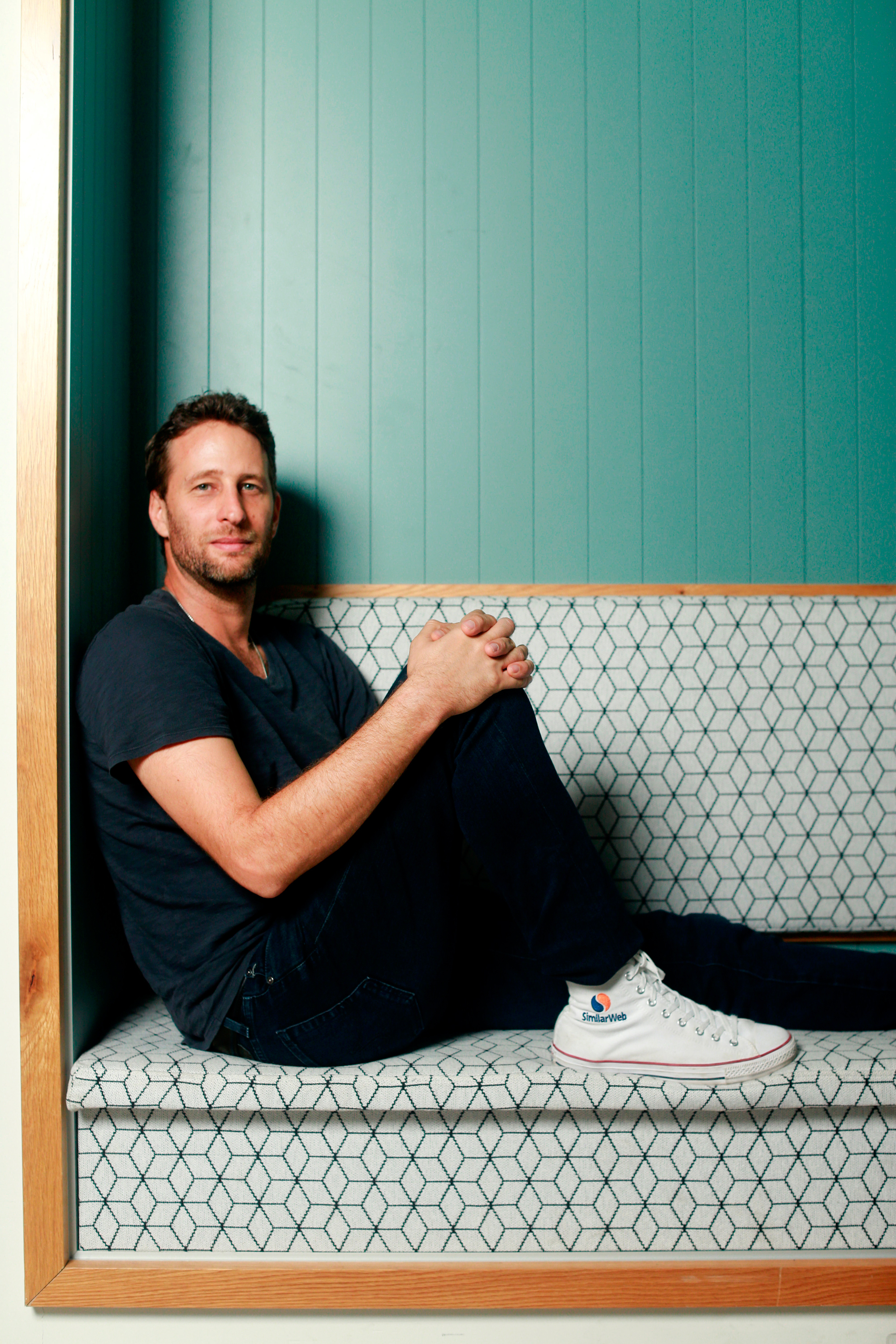 Or Offer. Photo: Amit Shaal
So he remained in the jewelry business until he heard about David Yurman. "My parents designed jewelry that was unique at the time, combining silver, gold, and precious stones. One of my suppliers told me that there was a super-designer who was doing something similar, a groundbreaking combination of stones in silver jewelry. Yurman was an example of someone who was hugely successful in this field and created a brand. I wanted to find similar designers online, I did some market research in this niche and saw that it is very difficult to do so, there were no means to search for products based on resemblance to other products. That was the birth of SimilarWeb, as a browser extension that helped you find similar websites to whatever you were searching for. It's also the source of the company’s name. I convinced a friend of mine, who had just been released from an IDF elite technology unit, to come and help me with programming and he brought in a few more friends who had served with him in the unit, and in 2007 we founded the company. We operated like that until 2011, with seven or eight people." In May, in the midst of the latest round of fighting on the Gaza border, SimilarWeb began trading on the Nasdaq at a value of $1.6 billion, raising $180 million. Tel Aviv was under fire, and in New York, Offer was celebrating. One of the banks that accompanied the IPO, knew the story behind the company and gave Offer a special edition of a book on Yurman's jewelry. Fourteen years after he set out in search for jewelry, Offer had come full circle. Even when you look at the generic photo of SimilarWeb launching its trade on the Nasdaq, it is easy to spot something unusual. Offer stands there, prominent in the center of the picture, a sole founder, of which there are almost none. It is extremely rare to come across an Israeli firm that reached the top and it does not have three or four co-founders. Furthermore, Offer does not really fit the mold of an Israeli entrepreneur. He did not go through a military technology unit, did not study computers, did not set his eyes on the high-tech sector, after all, he was interested in jewelry. His different track created a slightly different company and a different managing style. SimilarWeb may have been born to look for the similar, but somehow constantly introduces an unlikely model. “People are surprised I didn't give up in the middle. I'm really a Cinderella story" Empire is a keyword that came up several times during the conversation with Offer (38), who lives in Kfar Shmaryahu, is married and is a father of two toddlers. He always wanted to rule an empire, only that, unlike others, it was not really clear that it would be a technological one. SimilarWeb is already worth $1.8 billion. Its revenues grew by 32% to $93 million in 2020, and according to the first quarter of 2021, it may end the year with revenues of $120 million, although it is still recording losses. The company employs more than 900 people in Israel and the U.S., and soon its logo will replace mobile provider Pelephone’s logo on the side of the Rose House in Givatayim, where SimilarWeb will house the entire building. "For a long time I wanted a headquarters that is only mine, and I deliberately looked for iconic buildings that house familiar names, such as Pelephone or Isracard. I look at empires," Ofer explained. "I see it as a statement, high-tech and start-ups are no longer child's play. SimilarWeb is a public company and is part of the process by which new high-tech replaces old high-tech." It is surprising because you did not come from the old high-tech, nor did you grow naturally into the new high-tech. "As a kid, I used to be a computer geek, but it mostly came down to playing games with friends from Tzur Hadassah, where I grew up. It was the early days of the internet, and one of the guys would set up a terminal to remotely connect to his computer and we would play together. The IDF’s 8200 unit wanted to draft me because I was already a programmer, but I was not interested, back then, 8200 did not have the reputation it has now. Besides, I wanted to be a combat soldier. It is something important in my family and community, my big dream was to join the special forces, but I did not, however, I ended up in Oketz (“Sting” in Hebrew) the IDF's canine unit.”

If a technological military service contributes to computer people, Offer explained that combat service contributes to entrepreneurs. "It helped me a lot, including my personality. The experiences I had to deal with during those years, today I know that it was the basis for both entrepreneurship and leadership. During a big part of my service, I was caring for dogs in the south, in an outpost inside the Gaza strip. Being a dog operator is a unique position, even as a young soldier, you join experienced combat forces, you casually speak with brigadiers and lieutenants generals. You need to make quick decisions under pressure and tell them whether to keep moving forward or not. It takes courage and a lot of leadership. This is true not only for me but also for Israeli entrepreneurs in general - they have more courage than CEOs who grow up in Europe, for example. It is not for nothing that in the U.S. a large proportion of entrepreneurs are immigrants.