After four years of operating in secret, the Israeli startup AIR unveiled its aerial vehicle Air One on Tuesday. It is a two-seater vehicle, which takes off and lands vertically, but is also equipped with a wing that allows it a greater speed and flight range than similar vehicles that are currently in development, and resemble manned gliders. Unlike other similar models, which have already been introduced by Boeing, Airbus and a host of other startups, and are intended for commercial use (what gave the emerging category the nickname Air Taxis), AIR designates its vehicle for private use, claiming a relatively cheap price yet to be revealed, probably less than $200,000, and a cost of several tens of dollars per flight hour. 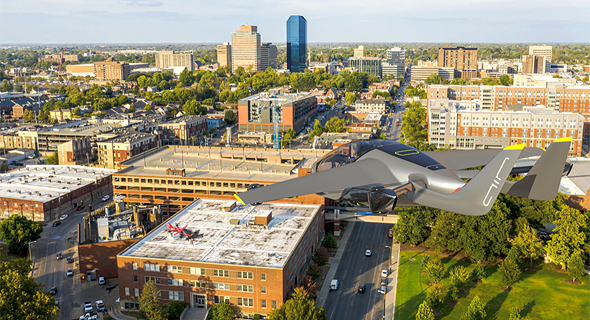 The AIR ONE electric plane Photo: AIR
"The vehicle was designed from the start for an auto production line rather than an aircraft one, so that it can be built at a rate of 10,000 per year and not 100," Rani Plaut, the company's CEO, who founded it with CTO Chen Rosen, and COO Netanel Goldberg, told Calcalist. After testing several unmanned vehicles to examine its concept, the company will begin experimental levitation on its final model next February, which is supposed to take off on its maiden official flight this June. The model will be equipped with a lithium battery at a capacity of 60 kWh, slightly more than a basic Model 3 Tesla, and is supposed to fly at a range of up to 160 km (about 100 miles), at a maximum speed of 250 km/h (about 155 miles/h). To date, the company, which employs 20 people, has raised $10 million, mostly from two automotive businessmen. Although the licensing process with the U.S. civil aviation authority, the FAA, is still ongoing, the company estimates that it could begin serial production by 2024, and has already begun receiving its first orders, including a $1,000 down payment on each order. "We are not part of the flying machine genre, that is more of a gimmick that will not produce a good vehicle or a good plane," Plaut continued. "We are a personal aircraft that blends the benefits of a glider with vertical takeoff and landing using eight engines, and a wing that produces lift for speed and flight range. We built the vehicle without moving surfaces, we do not tilt the wings or the engines, which greatly reduces costs." What license will be needed to fly this vehicle? "The FAA is creating an SVO license for it, meaning a license for a simpler-than-airplane vehicle. In the meantime, we have already started a licensing process with the Americans and are considering other categories as well, for example, a sports pilot license, which in the U.S. requires only 15 hours of training and five hours of solo. In the U.S. you can take off with such a vehicle from the field and be allowed to fly in about 90% of the country, excluding cities and airports." It has to be a very safe vehicle. "The battery consists of four batteries. You can lose one battery, you can lose one of the eight engines that exist, and even lose a wing and still land safely. And there is also an emergency parachute that can be opened when needed."
Related articles:
How will you ensure cheap flight costs with an electric battery that has a limited lifespan? "The battery in a new electric car lasts more than ten years, and we use the same technology. The use of the vehicle will be less intense than in a car, so we estimate that it will survive even longer." Where will the AIR ONE be manufactured? "We will manufacture the electronic systems in Israel, together with the flight control we have developed. The assembling will be done close to customers, initially in the U.S., but later Europe and Asia are also an option."