“We're pushing the boundaries on how we think about talent.”

Getting the work done and believing in the work are key to success in a startup environment, explains Ruslan Tovbulatov, VP of global marketing at Gloat.

TAGS:
Getting the work done and believing in the work are key to success in a startup environment, explains Ruslan Tovbulatov, VP of global marketing at Gloat. He says that getting things done instead of waiting for someone else to do them is a core value at Gloat, and it is something he learned at Thrive. Both companies had new ideas that required changing customer mindset, and Tovbulatov shares that a strong belief in the mission and a great team were needed to persevere. He got experience inspiring people to change in his previous work at BrandLab for YouTube, working with major brands to make a transition to digital storytelling and brand building. Now Tovbulatov is helping companies make the most of their internal talent with Gloat’s talent marketplace. The platform matches the skills and passions of employees with the needed work, helping businesses and team members excel.

You've held some quite fascinating positions within Google, YouTube, and Thrive. How do you see your own career journey?

I was born in Moscow, Russia. I moved to the United States at a very young age. I started my career in the States, at a company called Kantar Retail, which does large-scale consumer research. That really set me up for the rest of my career in many ways because it taught me the power of consumer insights and human decision-making.

I found my way into Google and had an amazing journey there working on the core Google business and mobile. I really picked up the ins and outs of marketing. Then I went to YouTube. We launched an amazing special team there called the BrandLab, where we worked with 250 of the largest brands helping them move to digital.

Then I was lucky enough to get recruited into a tiny company called Thrive Global at a time when not everyone was talking about mental health and well-being. The CEO, Arianna Huffington, had just written a book called Thrive that really spoke to me. We were all obsessed with technology, but what about the human side of things? What about humanity? We turned it into a SaaS business and grew it from the ground up. I was employee 15 or 16 there.

I spent four great years there and then found myself at Gloat. Gloat is transforming the conversation around how we match talent to opportunities and how we think about data-driven decision-making around talent within organizations.

In the BrandLab, what did you learn about creating a sustainable brand in the digital world and digitizing brands for consumers?

I think that was one of the most fundamental experiences for me. I got to understand the decision-making that organizations have been doing for decades around brand building and how you actually adapt that to new channels and new mediums.

We launched BrandLab in 2012. At that time, YouTube was just a place for dogs and cats on skateboards, but it was not a place to build brands. It's absolutely insane how quickly things change. At that time, people didn't even believe that we were going to move to digital. A lot of the lessons learned there were how do you shift people's mindsets and expose them to new thinking and opportunities and inspire them to try new things. 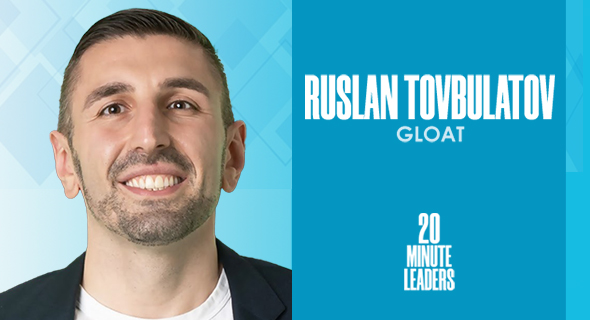 With such an important mission at Thrive and then becoming chief marketing officer, what are just a few key lessons that you learned at a startup?

It really is a different journey. I think one of the number one lessons is the grind is very real in a startup environment when you're a small company. I always joked, "At Google, you could file a ticket for something, and it would just get taken care of."

Arianna said, "Listen, if the trash doesn't get taken out, I take out the trash." And she picked up the trash can, and she started walking toward the door. That mentality actually really carries a lot of successful entrepreneurs. You can't just sit back and expect someone else to do something or take care of it. One of our cultural values at Gloat here today is get it done. You don't sit back and wait for it to get done, you just get it done. That mentality is very important. I think that has to underpin everything that you do.

I think it's so important to realize that a lot of times when you're working at a startup, you're kind of creating the market and not everyone is going to see it at first. We were trying to convince the world that mental health and well-being mattered. People would almost want to laugh you out, being like, "Ah, this is soft things.”

But you have to really believe in what you're doing. That's why having the right people around you is very important. There are very hard days where you question if it will ever get adopted. At Gloat now, we're pushing the boundaries on how we think about talent, skills, opportunities, and hierarchies within organizations.

There's a side of Gloat that a lot of you know in Israel that is the external side, where we match external talent to opportunities at any company. But where we really hit the aha moment is something we built called the "talent marketplace." The idea is simple, but it's incredibly disruptive. Instead of your employees thinking their next best opportunity is outside the company, they’re looking internally.

It's a fundamental shift in the way we think about talent and matching people to opportunities. If you look back to the original org chart of IBM from 100 years ago, it is literally an executive at the top, then directors, and then people trickling down. The reality is that that's not how work is done anymore. And we don't believe we're just one title or one job. We have side gigs and hobbies.

We didn't have a mechanism for talent management that way. So the talent marketplace actually breaks down skills of people and their passions on one side and then breaks down the work on the other, and dynamically connects the two.

Unilever launched an ice cream brand in six weeks instead of months. At Schneider Electric, someone was going on maternity leave and broke her role into five or six and backfilled it. She came back avoiding the drama of figuring out where the person goes in the organization and then ended up promoting some people that worked in her position.

I can see you sitting with the C-level execs and making that case. But how do you get your message to the remaining portion of the organization?

I think that's where our job becomes really exciting. I like a good marketing challenge. Selling enterprise software or the technology is step one; sometimes it's actually the easier step. How do you get people to adopt it? My job as a marketer is to find these stories and then bring them to the people within these organizations and the market.

Time and time again, every customer that rolls out a talent marketplace finds that when you open up your talent, you actually get access to even more talent. All of a sudden managers are realizing, "I gave up a few hours of my teammate's time to something, but now I actually have access to talent I never had before."

Even there at Gloat, I just launched a new video. I thought I'll either work with a creative agency and they'll get someone to do the voiceover or we'll hire a voiceover artist. And I had this realization, "What if I asked for a voiceover artist internally?" Within an hour or two, someone from our customer success team says, "I am a professional voiceover artist for brands you might recognize." We had a custom recording done from within the company. The manager sees they have an engaged employee who's now taking on a marketing project and having fun. My job as a marketing leader is really letting the customers and the employees, frankly, tell that story for us.

What were you fascinated by as a kid?

I was such a child of the transition between Moscow and America. I became so hungry to understand cultural differences. I think that I've always been really driven by that.

Also, I was always fascinated by consumer mindset. I remember seeing a new brand of gum on the shelf. It was a new package. I started realizing there's this decision-making process that this gum is worth this much and uses this color and is in this format. It kind of blew my mind - this idea that you have to really think about positioning, pricing, packaging, aligning that to consumer expectations and needs, and I think that actually got me on the journey to where I am today.