The Israeli company, which streamlines the quote-bind-issue process for insurance brokers, took its Series A to a total of $52 million

Insurtech companies largely experienced a year to forget in 2021. The shares of promising insurtech unicorns like Lemonade and Hippo came crashing down and it seemed that the sector was losing its shine. However, one of the Israeli startups active in the industry showed on Monday that insurtech is alive and kicking, with Sayata announcing that it has added $35 million to its Series A, taking it to a total of $52 million. The new funding comes five months after the company announced it raised $17 million, with its valuation increasing significantly since.

“The company decided to call this an extension of the Series A rather than a Series B out of the intention to raise a more significant Series B later on,” Asaf Lifshitz, CEO of Sayata, told Calcalist. 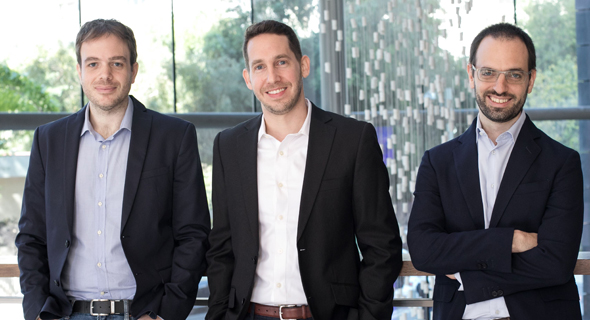 Sayata co-founders. Photo: K Rifkind Photography
The additional funding was led by Pitango Growth and Hanaco Ventures, with participation from previous investors Team8 Capital, Vertex Ventures, Elron Ventures, and OurCrowd. The extension was completed at the end of last year and the company also completed additional secondary deals reaching millions of dollars. “After we completed the $17 million funding we received additional offers for investment due to our accelerated growth,” said Lifshitz. “I’m not an analyst who knows why the public insurtech companies have seen their value drop. They were founded to compete with the existing insurance companies while we work with both the new generation and traditional insurance companies. This is a massive sector with many players. Nothing has changed for us.” The Sayata platform streamlines the quote-bind-issue process allowing insurance professionals to seamlessly place more insurance policies in a fraction of the time. “We developed a tool for U.S. insurance brokers that saves them time and allows them to offer a variety of solutions with one click,” added Lifshitz. The company has offices in Israel and the U.S. and employs around 40 people, with eight more employees to join the company by the beginning of February. Sayata plans to increase its workforce by an additional 50% during 2022.
Related articles:
Sayata’s technology automates the time-consuming process of finding and securing business insurance. Brokers are freed from the manual tasks of hunting for quotes, shuffling applications, and the lengthy back and forth with insurance providers to finalize coverage. Through Sayata, brokers input just a few pieces of information and in seconds the software platform delivers multiple insurance quotes tailored to the client’s needs. Once a quote is chosen, brokers complete the process entirely on the platform, securing coverage in a fraction of the time, allowing them to put their efforts towards deepening current customer relationships and expanding their client base. The Sayata platform launched nearly two years ago offering a way for brokers providing cyber insurance for SMBs. The automated platform proved successful in locking down coverage for SMBs regardless of market conditions; whether it’s a “soft market” where insurance is easy to find and relatively inexpensive, or today’s “hard market” where cyber premiums are rising and coverage is more difficult to find due to the prevalence of ransomware. “Sayata’s 10X growth over the past year and its expansion into the commercial SMB insurance sector valued at $100 billion suits our investment model at Pitango Growth,” said Isaac Hillel, Managing Partner at Pitango Growth. Lior Prosor, founding partner of Hanaco Ventures added: "We believe the next multi-billion dollar insurtech companies will not be new consumer brands like generation 1.0, but rather solutions that transform the industry's current manual back-end processes into streamlined digital solutions.”
Buzz