No one was immune: Israel Police Pegasus surveillance list revealed

CEOs of government ministries, journalists, tycoons, corporate executives, mayors, social activists, and even the Prime Minister’s relatives, all were police targets, having their phones hacked by NSO’s spyware, prior to any investigation even opening and without any judicial authorization

TAGS:
Calcalist can reveal for the first time a list of dozens of citizens who were targeted by Israel Police, having their phones hacked by NSO spyware and their personal information swiped and filed away. The surveillance was conducted to phish for intelligence even before any investigation had been opened against the targets, and without judicial warrants. Israel Police said in response that its people are “cooperating with the Attorney General of Israel’s examination team.” The list which reached Calcalist includes the CEOs of the ministries of transport, finance and justice at the time, Keren Turner, Shai Babad and Emi Palmor, respectively. It also includes leaders of the protests organized by disability rights groups and Israelis of Ethiopian descent, as well as mayors Miriam Feirberg of Netanya, Yoram Shimon of Mevaseret Zion, Yaakov Peretz of Kiryat Ata and Moti Sasson of Holon. In addition, spyware was installed on the phone of witnesses and some of those interrogated as part of Case 4000 and those involving communication conglomerate Bezeq for which former Prime Minister Benjamin Netanyahu is also standing trial. People who had their phones hacked include, Iris Elovich, indicted on bribery charges in Case 4000, former Ministry of Communications CEOs Shlomo Filber and Avi Berger, Bezeq CEOs Stella Hendler and Dudu Mizrahi, Walla CEO Ilan Yeshua, former Walla editor-in-chief Aviram Elad and other journalists at Walla. The family of former Prime Minister Netanyahu and his inner circle were also targeted, including his son Avner Netanyahu, and advisors Topaz Luk and Yonatan Urich. Businessman Rami Levy was also hacked, as was the chairman of the workers union at Israel Aerospace Industries, Yair Katz, son of Member of Knesset, Haim Katz. 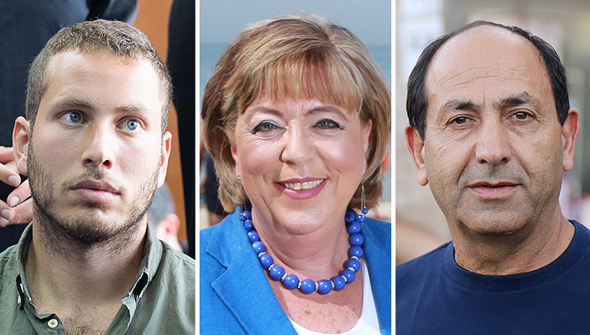 Avner Netanyahu (left), son of former Prime Minister Benjamin Netanyahu, Netanya mayor Miriam Feirberg and businessman Rami Levy were all among those hacked by police. Photo: Avi Mualem, Asaf Friedman, Tal Shahar
The bland term used by police for these activities was “technological and data oriented policing,” but Calcalist reveals that the use of Pegasus wasn’t local or limited to a small number of cases. This became one of the most useful tools implemented by police to gather intelligence. Special operations members of the police’s cyber-SIGINT unit have been penetrating the phones of citizens secretly and without judicial warrants, taking control of them with Pegasus against the law and with the understanding that judges wouldn’t approve such activity. Protesters targeted In every democratic country protests are considered to be an imperative right to voice one’s opinion and an important tool to balance the power of the ruling government. However, for Israel Police, protests and demonstrations, regardless of the reason behind them, were treated as a real threat. Analysts at the cyber-SIGINT unit who implemented the illegal orders to track protesters were told that the goal of the mission was to collect early intelligence due to the possible threat to public order. The collecting of intelligence information (it is important to emphasize that such information cannot be used in court unless it was whitewashed later on through different methods) was done while the police was headed by Roni Alsheikh, the former deputy head of Shin Bet. Yoav Hasan was the commander of the SIGINT unit at the time, with Yosef Kachlon heading the technologies unit. Both Hasan and Kachlon joined the police from the military’s Unit 8200. Police chiefs claimed at the time that they require early information regarding the plans of protest organizers as only then would they be able to prevent the blocking of main junctions during rush hour or from protests turning violent. SIGINT collected everything: the location of the protests, the plan for the protests, how many people will attend, and which junctions might be blocked. The unit prepared an operational plan for every protest so that “there wouldn’t be any surprises.” The information that anti-Netanyahu protesters were also tracked was revealed in Calcalist two weeks ago. It can now be revealed that disability rights group heads, protesting for the increase of stipends for the disabled, and those leading the protests of Israelis of Ethiopian descent, who ironically were protesting against the way they are treated by police, were among those tracked. Pegasus was also installed in the phones of settlers on the West Bank on the eve of outpost evacuations. Ministries CEOs tracked The intrusive tool was also used against some of the most senior government officials, in some cases to determine whether activities like leaking information to journalists had taken place. Keren Turner, for example, who was the CEO of the Ministry of Transport and then the CEO of the Ministry of Finance, both under minister Israel Katz. Someone suspected that Turner was leaking secret documents to journalists and police began tracking her phone with Pegasus. That was also the fate of the CEO of the Ministry of Finance who preceded Turner, Shai Babad. The fact that he held one of the most powerful positions in the country and had a strong political connection with heads of government didn’t help him. He was also suspected to have leaked information to journalists and his phone was hacked in order to find incriminating exchanges. The CEO of the Ministry of Justice, who is in constant touch with police, was tracked as well. Emi Palmor, who served as the ministry’s CEO for five years, was ousted from the role in 2019.
Related articles:
Pegasus used to determine senior witnesses' credibility The Bezeq case began as an investigation of the Israel Securities Authority, with Case 4000 branching off later on, focusing on the allegedly unlawful relationship between Shaul Elovich, who controlled Bezeq at the time, and Benjamin Netanyahu. The intelligence department at the ISA has a good relationship with police’s SIGINT unit and to its request the phone of Shlomo Filber, the CEO of the Ministry of Communications at the time, was hacked. Thanks to the surveillance, text exchanges between Filber and Bezeq CEO Stella Hendler which raised suspicion that he was leaking her documents, were revealed, leading to Hendler’s cell phone also being tracked. Police went one further and also penetrated the phone of Dudu Mizrahi, the deputy CEO of Bezeq at the time who currently serves as the company’s CEO. Mizrahi was hacked not because he was suspected of any wrongdoing, but rather to assess the credibility of the testimony he provided. All of these hacks took place in order to acquire intelligence and without any warrants or judicial approval.

During the investigation into Case 4000, police hacked into phones to check whether the two main witnesses it targeted, former Walla CEO Ilan Yeshua, and former Walla editor-in-chief Aviram Elad, were being put under pressure.

Additional witnesses in the case were also hacked, including the phones of former Ministry of Communications CEO Avi Berger, and additional journalists at Walla. In these cases as well, the goal of the surveillance was to determine the credibility of their testimonies and make sure they weren’t hiding any additional information.

In these cases as well, the hacks were initiated in order to collect intelligence. They were done without judicial warrants and the information collected was forwarded to investigators, without revealing the means used to acquire it.