Assaf Eisenstein, Co-Founder and President at Lusha, shares insights after reading "7 Powers: The Foundations of Business Strategy” by Hamilton Helmer 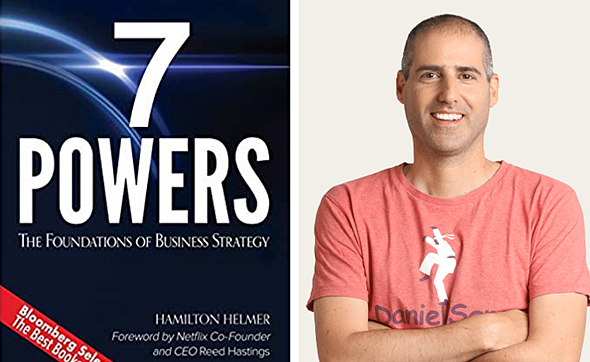 Assaf Eisenstein, Co-Founder and President at Lusha. Photo: Lusha.com/Amazon
Summary: With over 40 years of business experience in multiple industries, Hamilton Helmer breaks down how certain organizations revolutionized their space, broke down existing norms, and became industry leaders. Helmer identifies seven "powers" that truly make a difference in positioning an organization and give it an edge over all its competitors. The book has the power to transform the way business leaders look at strategy. It's not just about the obvious - creating a good product and marketing it to the masses - it's about identifying where you need to invest your efforts in a way that sets you apart from your competition. His seven strategies make you reexamine where your organization's strengths lie, and if it's time to make significant changes. Important Themes: The important themes are obviously the actual “powers” that successful companies have, so let’s break them down. What I’ve Learned: Heading a data company myself, the book gave me a new perspective on the power of data. Perhaps the 8th power to Helmer’s 7. Gathering, maintaining, securing, and distributing our data is our business, and if we do it well, and we take into account the seven powers, we can continue our ascend for years to come. The book isn’t a user guide, it’s an exercise in rethinking strategy. It doesn’t tell you what to do, but how to think in a different and fresh way. We tend to think about strategy as a very general plan for getting from point A to where you aspire to be. In the case of business, to become market leaders. But drilling deeper, Helmer sees strategy as a search for the conditions that will fully realize the potential of a business.

The seven powers allow you to approach business strategy in a much more nuanced way, and really understand the essence of your advantages as opposed to your competitors.

It’s also about how to maintain these powers over time.
Related Stories:

Deeply understanding a company’s power (or multiple powers) can refocus the entire company, and should directly impact your bottom line.

I particularly enjoyed Helmer’s breakdown because it offered a new perspective on how we can do things around here at Lusha. It helped me also looking at the market in a new way, trying to find those seven powers in other market leaders and in emerging players. Who Should Read This Book:

Considering the book answers questions about company strategy and vision, it most naturally targets C-level executives. But beyond this obvious readership, it’s an enjoyable read for tech people and business-minded folks of all walks. Helmer masterfully changes the perspective of how you evaluate companies, making it valuable not only to organizations but also to trendsetters and business-minded individuals. market, and that’s valuable insights not only to all levels of the organization, but also many different departments.