The research was published ahead of the beginning of the academic year, schedulaed to start Sunday in Israel. 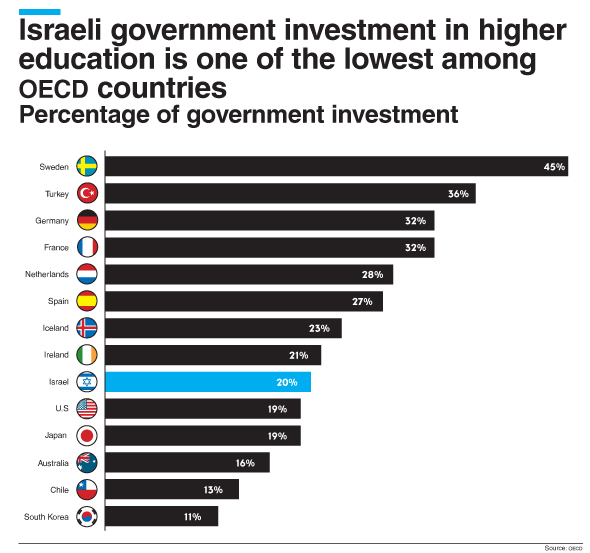 According to Mr. Ben David, the declining investment is causing a decline in academic achievement and prestige, measured by the drop in the number of articles authored by Israeli researchers cited in academic papers.

In addition to insufficient funding, Mr. Ben David listed the growing ratio of students per instructor as one of the factors jeopardizing the achievements of Israeli academia. According to his findings, in 1999 the ratio in Israeli universities was one staff member for every 7.2 students. In 2014, the ration was 1 to 10.6. This trend is likely caused by the growing numbers of Israelis seeking higher education as well as the inability of local academic institutions to finance sufficient staff.

Israel has one of the highest percentages of people holding academic degrees, surpassed only by South Korea, Ireland, and the U.S. In 2015, 35% of Israel’s population aged 35-54 had at least 16 years of education, according to data by Israel’s Central Bureau of Statistics.

35% of Israeli adults hold academic degrees
Since 1970 there has been a steady rise in the number of Israelis who completed a minimum of 16 years of education, a trend that goes hand in hand with the fact that the Israeli population has since more than doubled, as did the country’s per capita GDP. However, no new research universities have been built in Israel in more than four decades. In the recent Academic Ranking of World Universities (ARWU), published in August, only one Israeli university—the Technion-Israel Institute of Technology—was ranked among the top 100 universities in the world, falling from the 69th place to the 93rd. Also known as the Shanghai Ranking, the annual report, published by the Center for world-class Universities of Shanghai Jiao Tong University, rates the top 500 global universities.

Israel's Hebrew university of Jerusalem, once ranked in the 53rd place, dropped from the 87th spot to the cluster of 50 institutions ranked below the 100th spot. Ranked in the 92nd place in 2013, Israel’s Weizmann Institute of Science has been ranked in that same cluster for the last three years. Other Israeli universities dropped to even lower places in the global ranking.