In May, the venture firm co-founded by Ashton Kutcher appointed Effie Epstein as its newest managing partner

Sound Ventures' hunt for a new chief operating officer lasted a year long. The founding partners of the Los Angeles-based venture capital firm, Hollywood star Ashton Kutcher and Israeli-born producer Guy Oseary interviewed dozens of candidates. Their successful careers, Mr. Kutcher explained, required someone that would have their hands on the firm's wheel at all times, according to a March report by TechCrunch. Mr. Kutcher described their person of choice as someone he would like to work for, according to the report.

In an interview with Calcalist held in May and now published for the first time, Israeli-born Effie Epstein (34), the firm's newest partner, said she found in Mr. Kutcher, a smart businessman, with exceptional attention to entrepreneurs. Mr. Kutcher, she said, makes himself available to entrepreneurs 24-hours a day. 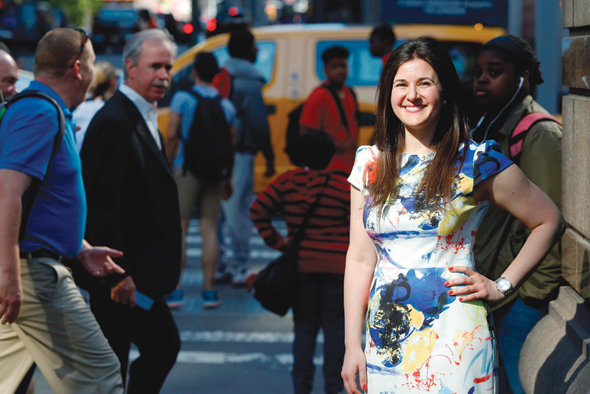 Managing partner and COO at Sound Ventures Effie Epstein
With multiple investments in Los Angeles-based startups and deep ties with Hollywood's creative network, Sound Ventures stands out among venture firms. Ms. Esptein says the firm's differentiation becomes more pronounced at Series B rounds raised by Los Angeles-based startups, a relatively uncrowded market niche. The average investment of the firm stands at around $1 million, Ms. Esptein said. The firm's founders are heavily involved in portfolio companies and Mr. Kutcher, according to Ms. Epstein, had spent much time aiding in the development of products at companies including Uber and Airbnb. As venture capitalists, Messrs. Kutcher and Oseary have made several investments in Israeli-linked companies, including alternative lending company Fundbox Inc., cybersecurity firm Sentinel Labs Inc., also known as SentinelOne, and public transportation app Moovit App Global Ltd. Despite a relatively unadvanced local market, Israel excels in nurturing top talents and ideas, Ms. Esptein said. Born in the desert city of Be'er Sheva in Israel's south, Ms. Epstein traveled extensively as a child. When she was 12, the family relocated to Dallas, Texas where her father represented Nasdaq-listed American-Israeli billing systems company Amdocs Ltd. Dreaming of becoming a pediatrician she enlisted at the University of Texas at Austin. Her attention shifted to business administration early on, and she started working at wealth management firm Merrill Lynch. As one of three women in a team of 50 bankers, she said, working at the wealth management firm taught her how important it is to work directly with decision makers and learn how they think. In her next position, Ms. Epstein worked as a strategy associate at the New York Stock Exchange, working closely with the company's CEO. Next came an MBA at Harvard, and positions at biometric identity confirmation systems company Clear, at media company iHeartMedia Inc., and at insurer Marsh, a subsidiary of professional services firm Marsh & McLennan Companies Inc. Throughout her career, Ms. Epstein stressed, she made finding the right an essential part of her work. Now that she is mentoring others, she brings out her own way of doing things. Sitting down with the firms' associates, Ms. Epstein said, she attempted to get them to articulate their long-term career ambitions and understand what they need to do to get there, regardless of the firm's needs. "I never had a male boss do that with me. Ever. Maybe there is a difference between how you coach as a woman vs. how a man would do it,” she said.

"Over the last 20 years, decision makers in Silicon Valley stayed the same. I think it brings about a natural bias—people invest in people who look like them, and that means Silicon Valley, as a whole, invests in white, male Stanford dropouts," she added.

Women entrepreneurs may want to factor that into the way they present their companies, she added.

But many times, the bias is so deeply ingrained it has no relation to what the woman entrepreneur says or does, according to Ms. Epstein.

“I have met with incredible women with PhDs in machine learning and AI who have built incredible platforms, and they told me that they have been knocking on every VC door and no one believed they had built it.”

Commenting on the small number of women in top positions in the venture capital world, Ms. Epstein said that climbing up the career ladder it feels " when it starts to get roomier."

“We need to remember our strength. women can be very disarming in a positive way,” she added.

Adding women to investment positions, she said, is a crucial step going forward.

"If you don’t have a woman in an investment position it's really hard to invest in female entrepreneurs. I spend 70% of my time on investing and 30% of my time on my role as a chief operating officer.”

From Foodtech to Quantum Computing: 2020’s Top Tech Trends According to OurCrowd