Scale, an exchange segment for small and medium-sized enterprises launched by the Frankfurt Stock Exchange in March, is looking to attract Israel-based startups. The German exchange sent representatives from BankM, a branch of FinTech Group Bank AG, to Israel in search of companies that have raised between €5 and €10 million in total equity funding and are looking to go public. No Israel-based companies are currently listed on the exchange.

The stock exchange hopes to attract as many as ten Israel-based startups, said Dirk Blumhoff, a corporate project manager at BankM in an interview with Calcalist.

In recent years Israel-based technology companies diversified their target markets in the search for stock exchanges to be traded at. The weakness of the Tel Aviv Stock Exchange has led even smaller companies go for Britain, Australia, Singapore, and China. 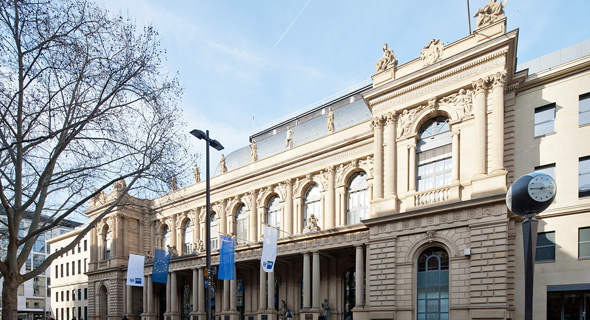 The Frankfurt Stock Exchange
In 2016, Nasdaq and the Tel Aviv Stock Exchange announced a partnership to create a private secondary market exchange in Tel Aviv. The connection between BankM and Israel was made through Ohad Finkelstein, until recently a partner at venture capital firm Marker LLC and now vice chairman of the bank’s board of directors. BankM is looking for companies valued at least €20 million, but preferably around €50 million. To encourage stock trading on the new exchange, Scale offers two analyst coverages immediately after the IPO. Scale IPO costs are estimated by the bank to be around €300,000, with a commission of 5% of all proceeds going to the bank. The Frankfurt Stock Exchange demands half-year reports instead of quarterly reports, but a listed company is still committed to a certain level of transparency and to meeting objectives in a way that private companies aren’t.
Cancel Send
To all comments
Buzz