In attempt to battle Alibaba's dominance this year, JD.com expanded an existing partnership with Tencent, the developer of popular messaging platform WeChat

JD.com, China’s second-largest online retailer, reported $19 billion (127 Yuan) in sales on Singles Day, a 50% rise from the year before, Reuters reported on Sunday.

JD.com’s Singles Day sales event began on November 1, according to the company to reduce delivery bottleneck. Rival Alibaba.com, China’s premier e-commerce site, reported $25 billion (168 Yuan) in sales during the company's one-day sales event, a 39% increase from the year before. 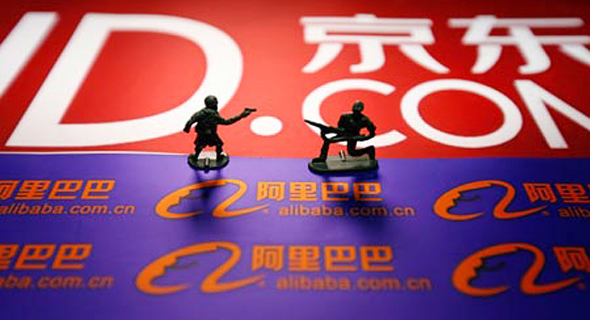 JD.com vs Alibaba (illustration)
In China, Singles Day is an annual 24-hour buying event that takes place on November 11. Once a holiday invented by Chinese students to celebrate single life, it was re-invented by Alibaba in 2009 as an online shopping event with discounts and special offers. By 2016, sales on Chinese commerce websites reached $25 billion on Singles Day, according to a report by Hong Kong-based marketing data company iiMedia Research Group—nine times the total online shopping spend of Americans on Black Friday.

Alibaba is the undisputed king of Singles Day. In 2016, 71.2% of all holiday transactions took place on its websites, according to iiMedia's report. JD.com, the runner-up, had 19.6% of the deals.

More by CTech:
In attempt to battle Alibaba's dominance this year JD.com expanded an existing partnership with Tencent, the developer of popular messaging platform WeChat. JD.com and Tencent shared users' data, and WeChat users were targeted with personalized ads by JD.com in attempt to reach new customers.
Cancel Send
To all comments
Recently Read