Indian conglomerate Shapoorji Pallonji Group has agreed to partner with Yam Pro on the development of a $180 million, 150-megawatt power station in Ghana

The $180-million power station will be located along a 6-mile stretch of coastline near Accra, the capital of Ghana. Floating devices will be fastened to piers or breakwater structures about 240 feet from the shoreline. The waves will push the floaters up and down, generating energy that will be transferred to facilities onshore using hydraulic fluid. 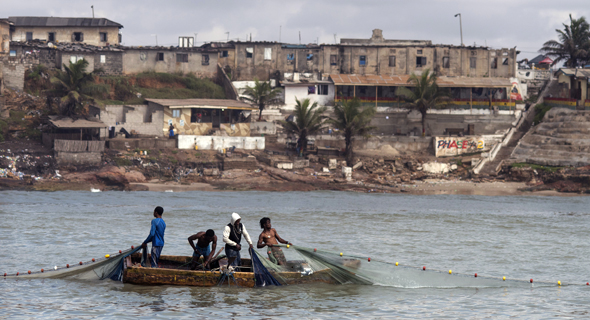 The system will be built in stages over the next three years and is designed to reach a 150-megawatt capacity, which is equivalent to that of a small coal-fired power plant. A 10-megawatt system will be operational in the next six months.

Yam Pro’s system captures the energy from breaking waves by converting it into hydraulic pressure, which is then turned into electricity. Yam Pro and Shapoorji Pallonji, together with a Ghanaian partner, have agreed to enter a partnership to develop and operate the wave power station. Shapoorji Pallonji will have a 50% stake giving it control over the project. Ghana’s national power utility has committed to purchase electricity produced by the system, Yam Pro co-CEO Zeev Peretz said in an interview. “They are short on electricity,” Mr. Peretz said. “We are coming to be part of the solution in Ghana.”
Related stories:

Before Shapoorji Pallonji signed the agreement, it conducted a due diligence review for more than a year, testing the viability of the technology, Mr. Peretz said.

Mr. Peretz described Yam Pro’s technology as “simple” and said the main advantage over competitors is that the majority of the system is on land rather than in the turbulent and salty water, which reduces both initial costs of developing the project and subsequent maintenance costs.