Israel’s ECI Telecom to Lay Off 6% of Workforce

In an email to employees, the telecom equipment manufacturer’s CEO Darryl Edwards wrote the layoffs were needed because of global competition, a decline in governmental support, and a strong shekel

Israel-based ECI Telecom Ltd. announced it would soon lay off 6% of its workforce, or about 100 workers, in an email sent to the company's employees by ECI's chief executive Darryl Edwards on Thursday.

In the email, which was obtained by Calcalist, Mr. Edwards said the privately-held telecommunications equipment manufacturer is trying to become more efficient in order to face increased global competition. In explaining the layoffs, he also cited a decline in the support ECI receives from the Israeli government and shekel’s appreciation against the dollar.

ECI has been approached for comment but has yet to respond. 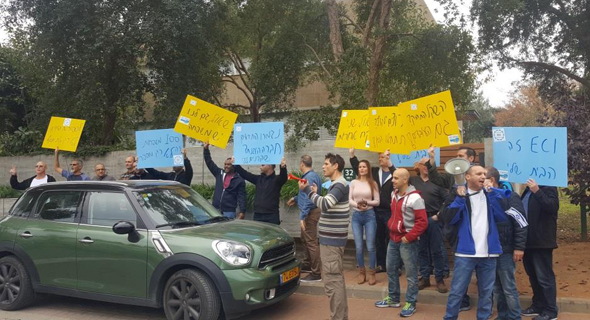 ECI employees protesting the planned layoffs. Photo: PR, The General Organization of Workers in Israel
“Management will do everything it can to help the departing workers, including assisting with job placement or training if necessary,” Mr. Edwards said in the email. “At the end of this current process, the lion’s share of the company’s employees will stay to work for a more competitive and more stable company.” The company had about 1,700 workers, before the layoffs. ECI went through a previous round of layoffs in 2012 and 2013 when hundreds of people lost their jobs.
Related stories:

In April, Calcalist reported that the company’s main investor, Shaul Shani, had poured $40 million into the company in order to maintain control of the ECI.

At its height, which was in the 1990s, ECI was one of Israel largest tech companies, employing about 6,000 people.
Cancel Send
To all comments
Buzz