In December the company announced a plan to let go 6% of its workforce, citing increased global competition

Israel-based telecommunications equipment supplier ECI Telecom Ltd. had a great year, company executives said in a recent announcement. At the same time, the company said it will let go 100 Israeli employees, triggering protests directed at the company’s main shareholder. In interviews with Calcalist, two persons with close familiarity with the company’s financial data revealed that while the company sales are indeed on the rise, ECI is expecting to face headwinds in the coming year. Its main challenges: low profitability in India, reduced government support in Israel, and a strong shekel.

Established in 1961, ECI currently employs some 1,700 people, 800 of them in Israel. At its peak, in the late 1990s, ECI was considered an industry leader and employed around 6,000 people. Over the years the company’s revenues declined, and ECI sold or spun off some of its subsidiaries. 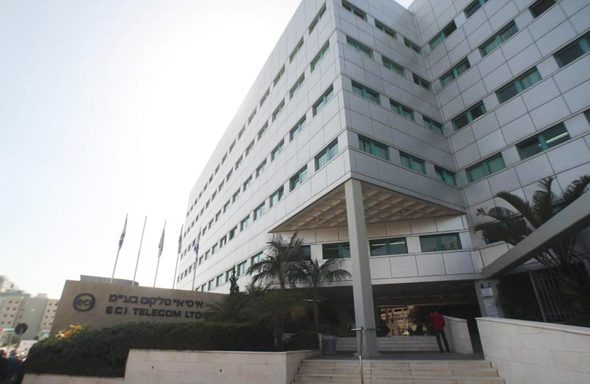 ECI headquarters. Photo: Orel Cohen
In 2007, private equity firm Ashmore Investment Management Ltd. acquired a 90% stake in ECI in a takeover bid, paying $1.23 billion. In 2014, Israeli businessman Shaul Shani, which acquired 10% of ECI during the takeover, paid around $200 million for Ashmore's stake. In April, Calcalist reported that Mr. Shani had infused $40 million into the company to maintain control. In December the company announced a plan to let go 6% of its workforce, citing increased global competition. A private company, ECI does not share detail about its financials. However, ECI is a profitable company with estimated revenues of $380 million in 2017, the two persons familiar with the details said, speaking on conditions of anonymity. The planned layoffs are projected to cut the company’s costs by $22 million in operational costs, these people said. Between $130 and $140 million of ECI’s revenues in 2017 were due to sales in India, these people said. In 2018, around half of the company’s sales are expected to come from sales in India, they added. While the company sees low profitability from these sales, production costs in India are relatively low, these people said. ECI employs 300 people in India, including 150 engineers in its Bangalore facility, they said. The Israeli government innovation investment arm, the Israeli Innovation Authority, has traditionally been generous with financial support granted to large Israeli companies, such as ECI and Elbit Systems Ltd. In recent years, demand for grants by smaller companies increased, and governmental funding for large tech companies decreased by 30%. In 2016, ECI received $15.9 million (NIS 55 million) from the Innovation Authority, which dropped to $9.2 million (NIS 32 million) in 2017. ECI is projected to receive $5.7 million (NIS 20 million) in 2018.
Related stories:

On Monday, Calcalist reported that ECI won a networking contract with the Israeli military. The five-year contract reflects potential sales worth tens of millions of dollars.
Cancel Send
To all comments
Buzz