The current permit held by Israel-based ICL will expire in 2030. A government draft proposal recommends allowing non-Israeli entities to participate in a future tender

TAGS:
Israel's government might tender the mining rights of the Dead Sea when the concession held by Israel Chemicals Ltd. (ICL) expires in 2030, a government report draft obtained by Calcalist reveals.

To better capitalize on one of Israel's most important natural resources, the draft's authors recommend launching a tender for the rights and opening it to foreign private companies, after setting a minimum price for the concession. 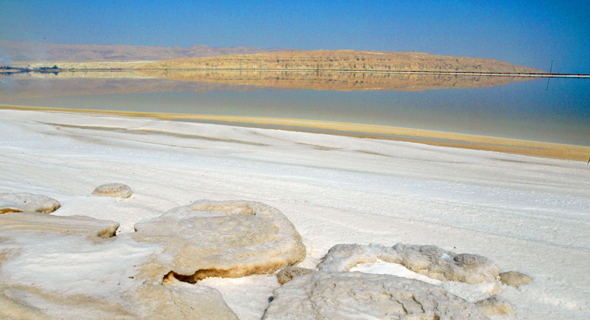 Israel has been mining potash in the Dead Sea in 1952 through a state-owned company called Dead Sea Works, which received mining rights until 2030. ICL was formed by the Israeli government in 1968 through the merger of several chemical manufacturers in the country, including Dead Sea Works. ICL delsited Dead Sea Work in the 1990s, buying all public-owned shares. In 1997, the Israeli government privatized ICL, and with it the Dead Sea concession rights, by selling it to Israel Corporation Ltd., a holding company then owned by Israeli businessman Shaul Eisenberg. The company is currently the fifth largest potash supplier in the world.

The Dead Sea has long been famous for its cobalt waters, its health properties, and for being the lowest point on earth. Unfortunately, it keeps on getting lower, at a rate of about one meter a year, due to overpumping from the Jordan River, its only major water source. The sea’s water crisis creates sinkholes that leave collapsing buildings, roads and agricultural areas in their wake. According to an article published in 2017 in the Journal of Geophysical Research, more than 6000 sinkholes have formed in the area over the last 25 years. The salt evaporation ponds operated by Dead Sea Works greatly exacerbate the situation due to water used for potash and salt harvesting, especially in the sea's southern basin where they are located. The salt that crystallizes on the bottom of the ponds is also raising the ponds' water levels and threatening to flood nearby hotels, endangering the already struggling hospitality industry in the area. Jordan also operates evaporation ponds in the area. In 2015, following debates about the licensing of natural resources to private entities in Israel, the government set up a team to examine ICL's permit and offer recommendations for how to handle the rights after the expiration date. The team, headed by Yoel Naveh, Israel's chief economist, was supposed to turn in recommendations by May 2016 but is only now reaching the end of the process. According to the draft, the team's first recommendation is to continue the mining process in the area despite the widespread damage it causes. The operations net Israel hundreds of millions of shekels a year, the team said, also providing employment to around 3,000 people and to auxiliary service providers. ICL has a built-in advantage if case a tender is published, as its current concession gives it an option to meet the terms offered by other companies to win back the mining rights, in case a tender is published. ICL has an additional advantage since it is the current operator and owner of the local chemical processing facilities. If no companies meet the minimum target price set by Israel the government the draft proposal recommends that the permits will be transferred to a new state-owned company to be set up.
Related stories:

The draft further proposes that any new mining permit would limit use of water in the production of minerals, and levy a tax on potential environmental damages.

As part of an arbitration process that has been going on since 2010, Israel now demands that ICL pays NIS 600 million for past mineral mining royalties.
Cancel Send
To all comments