Ahead of Israel’s Saturday win at the Eurovision song contest with the quirky “Toy” sung by Netta Barzilai, millions of Europeans were prompted to watch the song’s video on websites by the BBC, The Guardian, Elle and Der Spiegel as part of a campaign by content distribution company Outbrain and Israel’s national broadcaster Kan.

Ms. Barzilai, 25, and “Toy” were a leading favorite in the contest ever since the competing songs were first revealed, with bookies largely pegging her as the first-place winner. The studio version of the song racked up 29 million Youtube views over two months and generated buzz for the relatively unknown Israeli singer. Though she was later edged out in the bets by Cyprus’ Eleni Foureira, Ms. Barzilai took first place on Saturday with 529 points to a background of wild cheers. Cyprus came in second with 432 points, and Austria third with 342. The Israeli singer, who also won her bracket at the semi-finals, thanked viewers for “choosing difference” and “celebrating diversity,” tweeting “thank you Europe” shortly after. 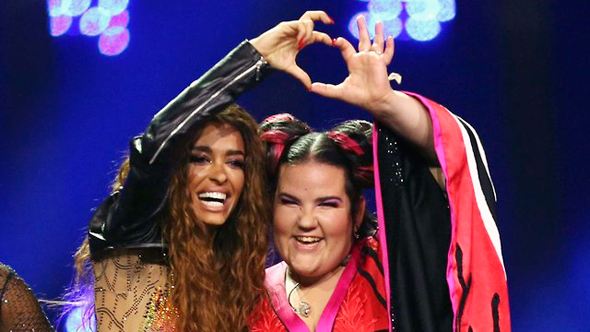 The final number of points awarded by each country was split in half between jury votes and votes from the general public, made through phone calls or SMS. Over 200 million people tuned in to watch the finals on Saturday, where Ms. Barzilai and “Toy” won first place, after being ranked 4th by the jurors. Cyprus, who came in second, was also a crowd favorite.

Founded in Israel in 2006 and now headquartered in New York, Outbrain Inc. provides a content promotion service to online advertisers. Alongside Taboola Inc., Outbrain is regarded as an industry leader, distributing content through sponsored and non-sponsored links published on content websites. The company states it makes over 275 billion monthly recommendations, reaching over 500 million people each month, working with publishers including CNN, The Wall Street Journal, US Weekly, and The Guardian. The campaign ran in the five European countries—France, Spain, the U.K., Italy, and Germany—according to a Sunday Calcalist interview with Sophie Melnik Amitay, Outbrain’s head of marketing in Europe, the Middle East, Africa and Asia Pacific. Between one and four million were presented with the video in each of these countries, she said. 50% of the people targeted by the campaign watched the video for at least 45 seconds, and 33% stayed for over a minute and a half. France, and Spain, the two target markets where the campaign had the highest reach, awarded the Israeli contestant 12 points, the highest score that can be awarded to competing songs by each country, Ms. Melnik Amitay said. According to a Thursday post by Israel’s national broadcaster Kan, the broadcaster teamed up with Outbrain to promote Ms. Barzilai in Europe over the last leg of the competition, between May 6 and May 11. Saturday’s TV broadcast of the competition in Israel garnered ratings of 35% in Israel or over 1.06 million viewers in a country of fewer than 9 million people.
Related stories:

Though the company is headquartered in New York, its two founders and many of its employees are Israeli, and the campaign was a chance for Outbrain to give back to the country, Ms. Melnik Amitay said. Efforts made by activists supportive of the Boycott, Divest and Sanction movement (BDS) against the Israeli contestant played a part in the decision to run the campaign, she added.

The campaign was delivered through a newly launched product by Outbrain called Focus, which offers playable videos recommendations that only open once clicked. Ms. Melnik Amitay said the campaign also served as a way for the company to launch the new product.
Cancel Send
To all comments
Recently Read