Founded in 2016, California-based Grail raised over $1.5 billion to date to develop a blood-based cancer test

Menlo Park, California-headquartered biotech Unicorn Grail Inc. is partnering with a team of Israeli researchers in its quest to develop its blood-based test for early detection of cancer.

Founded in 2016, Grail raised around $1.6 billion from investors including Bill Gates, Johnson & Johnson, and Bezos Expeditions, the personal investment arm of Jeff Bezos. Its liquid biopsy test, currently under development, makes use of circulating tumor-derived DNA, or ctDNA. The idea behind the method is that DNA alterations caused by tumors can be identified in the plasma of cancer patients as fragmented DNA. Though the precise mechanism behind the release of ctDNA is still unclear, with a large enough database for comparison, specific tumor genotypes could potentially be detected in the blood of patients that do not yet show any cancer symptoms. 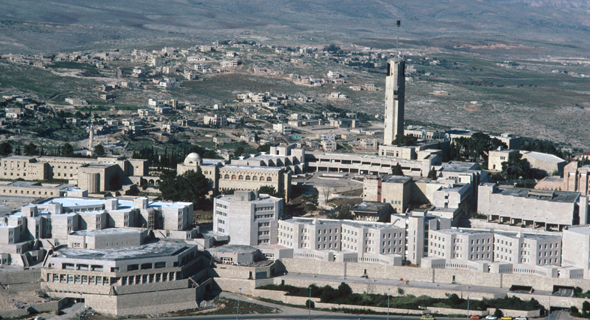 The Hebrew University, Jerusalem. Photo: David Rubinger
For the purpose of creating such a database, Grail launched in 2016 its Circulating Cell-free Genome Atlas Study (CCGA), a study intended to collect biological samples from over 15,000 participants. On Tuesday, Yissum Research Development, the knowledge transfer company of Jerusalem-based Hebrew University, announced Grail has entered into a strategic partnership with a team of university researchers, headed by Yuval Dor, a professor at the university's faculty of medicine. The team also includes researchers from Jerusalem-based Hadassah Medical Center. The Israeli team is currently engaged in creating a method to determine the tissue origin of DNA circulating in the blood, using a process called DNA methylation. When methyl groups are added to a molecule of DNA they can alter the way genes are expressed, without altering the genetic code itself. These epigenetic "identity markers" are typical to each cell type. Grail approached the university a few months ago regarding a possible collaboration after learning of the research during a U.S. conference, Yaron Daniely, CEO, and President of Yissum, told Calcalist in a Tuesday interview. The current agreement is for a few years, with an option to expand the partnership.
Related stories:

As part of the research program sponsored by Grail, the Israeli researchers will collaborate with the company to generate methylation data from multiple cell types. The data will then be used to create a method for interpreting the source of blood-based signals.

Most of the research will be conducted in Jerusalem in collaboration with Grail, Mr. Daniely said, and any future technological applications will belong to both Yissum and Grail. To a lesser degree, Grail’s program will also include collaborations with several other labs at the university, including an algorithm-focused computer sciences lab, he added.
Cancel Send
To all comments