Future Meat Technologies is developing a manufacturing platform for the production of meat products directly from animal cells. By the end of 2018, Future Meats intends to have a dish based on its cultured chicken meat served at a Jerusalem chef restaurant, the company’s chief scientist Yaakov Nahmias said in an interview with Calcalist Wednesday. The company is set to launch its first line of meat products by 2020, he said. 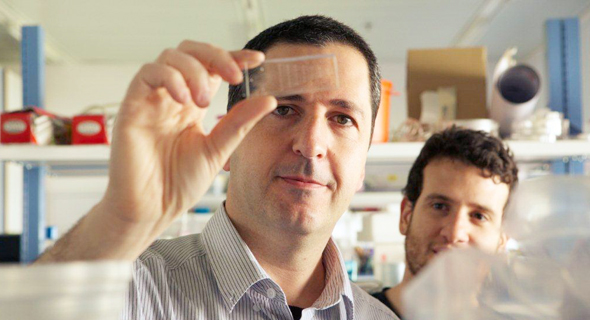 Yaakov Nahmias. Photo: PR
Founded in February, Future Meat Technologies sprung from research conducted at the Hebrew University of Jerusalem by a team led by Mr. Nahmias. The technology is licensed to the company by the university's knowledge transfer company Yissum Research Development. Companies producing lab-cultured meat state that in addition to eliminating the need to raise animals for slaughter, lab-grown meat products reduce exposure to food-borne illnesses and reduce pollution and water consumption. The world’s first cultured beef hamburger was grown at a Maastricht University lab in 2013 by Mosa Meat, a Maastricht, the Netherlands-based company backed by Google co-founder Sergey Brin. Other companies have since attempted to create meat from single cells. New York-based early-stage biotechnology startup Finless Foods Inc. is aiming to develop and mass manufacture lab-cultured alternatives to conventionally-caught and commercially-farmed seafood. San Francisco-based Memphis Meats produces beef, chicken, and duck products by culturing animal cells, and released the world’s first cultured meatball in February 2016 and the world’s first cultured poultry in March 2017. The company is backed by Bill Gates and Richard Branson. In January, Tyson Ventures also joined the list of Memphis Meats backers. In Israel, Tel Aviv-based foodtech startup SuperMeat raised $3 million in seed funding in January. The company, founded in 2015, produces edible lab-grown meat by culturing cells that have been extracted from a chicken. The first lab-grown burger, produced in 2013, cost about $2.3 million per kilogram. The price of cultured meat production has since plummeted. Production costs for Future Meats currently stand at $500 per kilo, and the company aims to reach a $5 per kilo cost by 2020, Mr. Nahmias said.
Related stories:
“Our technology is deconstructing biological manufacturing,” Mr. Nahmias said.

“We are developing a machine, bioreactor, that is capable of manufacturing biomass, or meat, in a way that could replace the need for traditional animal farming for meat,” Mr. Nahmias said, adding that the technology is such that smaller versions of Future Meats machine could, in ten years, become a countertop staple. “Like a breadmaker, but for meat,” he said, adding that he is unsure there is much of a market for such a kitchen gadget.