TAGS:
Finnish marine technology and shipping company Wärtsilä Corporation announced Monday it has entered a partnership with Israeli maritime startup accelerator the Dock Innovation Hub. The companies did not disclose the financial terms of the deal.

Headquartered in Helsinki and operating in over 200 locations in more than 80 countries around the world, Wärtsilä reported 4.9 billion euros in net sales in 2017. The company employs approximately 18,000 people. In a statement, Wärtsilä said the partnership is part of its effort to transform the entire shipping industry into an efficient, ecologically sound, and digitally connected ecosystem. 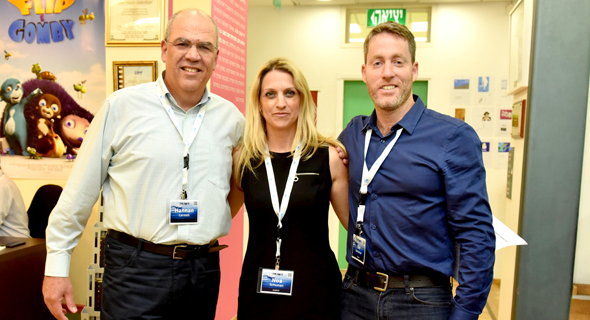 The Dock's Hannan Carmeli (left), Noa Schuman, and Nir Gartzman. Photo: The Dock
Founded in 2016 in the northern port city of Haifa, the Dock is a technology hub and accelerator focused solely on maritime and port-related startups. The Dock announced a partnership with Danish shipping conglomerate A.P. Moller–Maersk Group in March.
Related stories:
The Dock has invested in seven companies to date, including smart shipping container company Loginno, Pick-a-Pier, which uses big data analysis to optimize the berthing process for marinas, and mobile tracking startup Haystack Magic. “Corporate venturing and working with accelerators like the Dock are vital forms of collaboration in seeking new growth paths in industries that are profoundly impacted by digitization,” Steffen Knodt, director of digital ventures at Wärtsilä, said in a statement.
Cancel Send
To all comments
Buzz