The deal was first reported by Russian-language daily business newspaper Vedomosti on Sunday. A Gett spokesman confirmed the details in a message to Calcalist, Tuesday. The financial terms of the deal were not disclosed. 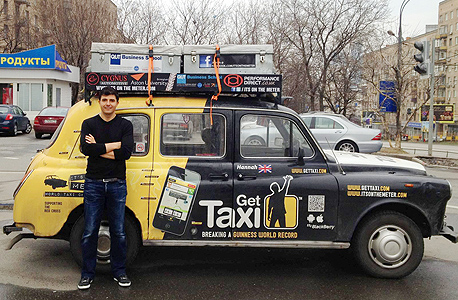 Gett CEO Shahar Waiser in front of a company taxi in Russia. Photo: Nimrod May

Founded in 2010, Gett develops a ride-hailing app, also offering delivery services, in Israel, Russia, the U.K., and New York. In New York, Gett operates as Juno, itself an Israeli taxi hailing company it acquired for $200 million in 2017.
Related stories:
Gett has raised $674 million to date, according to Pitchbook data, over $300 million of which from German carmaker Volkswagen. According to the latest financial reports filed in August by Stockholm-listed Gett shareholder Vostok New Ventures Ltd., Gett performs 100 million rides a year and “generates around $1 billion in mobility services.” Gett is aiming to become profitable in 2019, according to the reports and previous statements by the company.
Cancel Send
To all comments