After almost two days of fighting and arbitration efforts by Egypt and the United Nations, a ceasefire has been agreed upon between Israel and the Palestinian factions in Gaza

Update: After almost two days of fighting and arbitration efforts by Egypt and the United Nations, a ceasefire has been agreed upon between Israel and the Palestinian factions in Gaza, coming into effect Tuesday evening. Official Palestinian sources place the number of Palestinian dead at 14, with widespread damage as a result of over 150 Israeli airstrikes. On Israel’s side casualties included one dead and a few dozen wounded, as well as property damages.

A night of Israeli air raids and Palestinian rocket attacks left dead and wounded civilians on both sides of the border, as tensions escalated following an Israeli covert operation in Gaza that resulted in the deaths of an Israeli lieutenant colonel and seven Palestinian fighters.

The hostilities brought down months of arbitration negotiations that just on Sunday saw $15 million in Qatari aid delivered into the strip by Israel to alleviate the humanitarian situation and pay Hamas salaries. 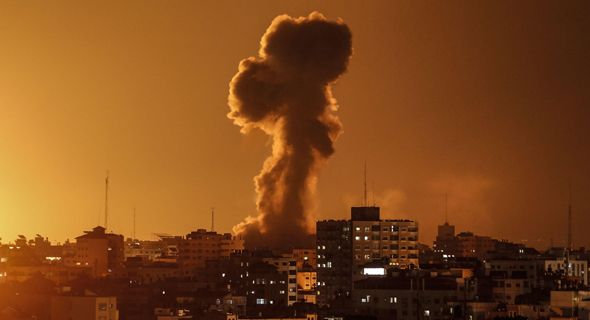 Al-Aqsa Television station. Photo: AFP
Israeli Prime Minister Benjamin Netanyahu was in Paris for a state visit when the events started and moved up his planned returned. Palestinian Authority President Mahmoud Abbas cut short his visit to Kuwait due to the events and returned Tuesday. Among the dozens of targets destroyed by Israel last night were Hamas' Al-Aqsa Television station, its radio station, and a Hamas office building. Employees of the TV station were notified by the Israeli military of the coming attack and evacuated the building. The organization's military intelligence headquarters and internal security headquarters were also bombed. Israel has shut down schools and ordered residents to stay near shelters in much of the country's south and in areas around the Gaza strip, which have all seen hundreds of missiles launched since the hostilities started. A direct hit to a residential building in Israeli city Ashkelon led to the sole civilian casualty so far on Israel's side, a 40 year old Palestinian man whose spouse was severely injured in the attack.
Related stories:

Hostilities continued Wednesday on both sides, and Israel has begun calling up reserve forces for the home front command and for units operating Iron Dome batteries.

Egypt and the UN are attempting to bring an end to the hostilities.
Cancel Send
To all comments
Buzz