The Canadian cannabis market is perceived as having great potential, thanks in large to the recent legalization of recreational use of the drug

Israeli cannabis companies are setting their sights on Canada, a market perceived as having great potential, thanks in large to the country’s October legalization of the recreational use of the drug. Medicinal use of cannabis has been legal in Canada since 2001.

Everyone working in the cannabis industry should aspire to get to Canada, Miki Mendelson CEO of Tel Aviv-listed Amir Marketing and Investments in Agriculture Ltd. said in a phone interview with Calcalist Sunday. Amir Marketing is one Israeli company that recently pivoted to medical cannabis. “Canada is now the main market and the biggest exporter of cannabis,” he added. 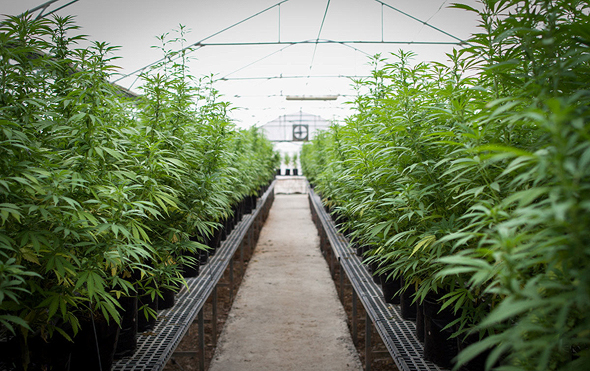 Cannabis greenhouse (illustration). Photo: Pavlina Schultz
Since 2014, 45 cannabis companies made their initial public offering on Canadian stock exchanges Toronto Stock Exchange (TSX) and TSX Venture Exchange (TSXV), both operated by TMX Group Ltd. In October, following the legalization of the drug for recreational use as well as medicinal use, these companies’ total market capitalization reached 35.3 billion Canadian dollars (approximately $26.3 billion). Israeli cannabis companies looking to list in Toronto are generally embraced. Rob Peterman, a vice president of global development at TMX said the company supports small and medium-sized businesses in various industries, including cannabis. Peterman spoke with Calcalist during his visit to Israel as head of a delegation of Canadian investors last month. Unable to go into specifics, Peterman said that Israeli companies will find a large investor base and access to research and cash fluidity in Canada. “As an Israeli cannabis company, we see Canada as a chance to get closer to the largest companies in the field,” Yona Levy, a director at Tel Aviv-listed company Tefen Industrial Engineering Management and Systems Analysis Ltd., said Sunday in an interview. Tefen recently shifted to cannabis, receiving its medical grade cannabis producing license from the Israeli Ministry of Health in July. Israeli companies can serve as a research and development arm for Canadian cannabis companies, he said. According to several people familiar with the subject who spoke to Calcalist on condition of anonymity, some private Israeli companies are also looking to Toronto. Ilan Bioculture Production of Cannabis Ltd. and IMC Ltd. are both planning IPOs at a valuation of 50 million Canadian dollars (approximately $38 million) and 100 million Canadian dollars (approximately $75 million), respectively, the people said.
Related stories:
However, not all Israeli cannabis companies are as excited about the prospect of an IPO in Canada. "Foreign companies get much lower valuations in Canada, compared with local and U.S.-based companies,” Yair Ephrati, CEO of Tel Aviv-based investment company Value Base M&A Ltd. said in an interview with Calcalist Sunday. Owning 27% of the company’s shares, Value Base is the largest stakeholder in Tel Aviv-listed Medical Compression System (D.B.N.) Ltd., which, earlier this month, acquired medical cannabis company Pharmocann Ltd. Companies can achieve nearly the same market caps in Israel as they can in Canada, Ephrati said. Israeli companies come with a track record of sales in Israel, which is a very small market, and some collaboration agreements signed with companies abroad, and these achievements fail to leave much of an impression on Canadian investors, he added.
Cancel Send
To all comments