The longtime voice of Waze navigation app in Hebrew is suing Apple for using her voice for Siri. She takes particular issue with the type of content her voice is coaxed into saying as Apple’s digital voice assistant. "Her voice on the Siri app is nothing but syllables joined together by an algorithm," Apple said in response.

The approximately $66,000 (NIS 250,000) lawsuit was filed Wednesday to a Tel Aviv District Court, and reviewed by Calcalist.

Israeli radio broadcaster and voice artist Galit Gura-Eini, the voice of Waze’s first female navigation directions in Hebrew, alleges that Apple has been using her voice recordings without authorization. Gura-Eini claims she was surprised to learn she was now the voice of Siri when the app launched in Hebrew in 2016. Earlier this year, Gura-Eini approached Apple requesting her voice be removed from the Siri app, but the request was denied. 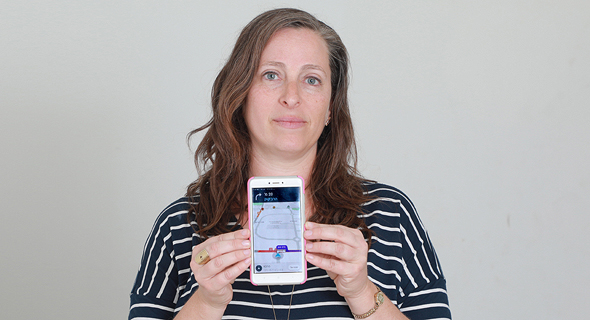 Galit Gura-Eini. Photo: Dana Kopel
According to Gura-Eini, people have been using her voice to produce sexual, racist, and otherwise violent speech through the Siri app. According to the lawsuit, filed by lawyer Ravit Ben Sarouk–Vilozny, hundreds of thousands of people use the Hebrew version of Siri daily. Apple has turned the plaintiff's voice “into a vehicle for improper and humiliating speech,” the lawsuit alleges. Gura-Eini’s voice is “widely identified and associated” with her own live persona, it continues. Gura-Eini’s voice was recorded in 2007 by the local subsidiary of Burlington, Massachusetts-base speech recognition company Nuance Communications Inc. The suit claims Gura-Eini gave Nuance the rights to use the recordings in speech production software, and for what she called “legitimate” purposes only.
Related stories:

Apple, through its lawyer Amir Halevy, claims as part of the suit it legally obtained the rights to Gura-Eini’s recordings from Nuance. Gura-Eini, Apple further notes, does not have a right to the recordings, for which she had been compensated.

Last year, Waze introduced a feature allowing users to record their own custom navigation directions. As part of the update, Waze deleted some of its more popular Hebrew voice narrators, including Gura-Eini.
Cancel Send
To all comments