More than 6.3 million Israelis are eligible to vote, according to the CEC, of whom approximately 22,000 are legally blind, according to the Ministry of Labor, Social Affairs and Social Services. Another 100,000 voters have visual impairments. Blind and visually impaired people usually vote with the assistance of escort. 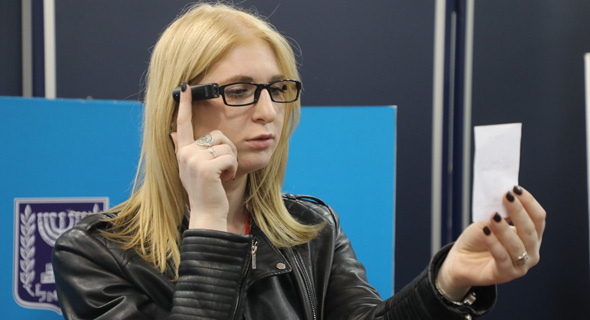 OrCam's election pilot program. Photo: OrCam Technologies
OrCam’s device, MyEye2, is designed to help visually impaired people “see their ballot.” The finger-size device is fitted with a camera and a microphone and clips onto glasses, discreetly reading printed and digital text aloud to the person donning the device. On election day, the device will be available for use in 12 polling stations throughout Israel, from Eilat in the south to Acre (Akko) in the north, as part of a pilot. On election day, OrCam’s device will scan the text on the ballots, reading the party names directly to the user. “While the device uses a camera, it does not store any of the information it reads, thereby maintaining the privacy of the voter,” Matan Bar-Noy, OrCam’s director of business development said in a Sunday interview with Calcalist. The pilot program is conducted in cooperation with the Center for the Blind in Israel.
Related stories:
Jerusalem-based OrCam was founded in 2010 by Amnon Shashua and Ziv Aviram, the founders of autonomous vehicle technology company Mobileye B.V., sold to Intel in 2017for for $15.3 billion. OrCam has raised more than $130 million to date and employs approximately 200 people, according to Pitchbook data.
Cancel Send
To all comments
Buzz