Earlier this month, Eliud Kipchoge, a Kenyan athlete and marathon world-record holder, became the first athlete to complete a full marathon distance in under two hours. Though not counting as a new marathon record, having been done in a closed event without following standard competition rules, Kipchoge’s achievement is nonetheless a remarkable feat of human endurance. Such feats are becoming increasingly common, with records being broken one after the other.

But as records keep coming crumbling down, some athletic purists question the validity of many of the new records given that they often rely on substantial technological advances in sports technologies. 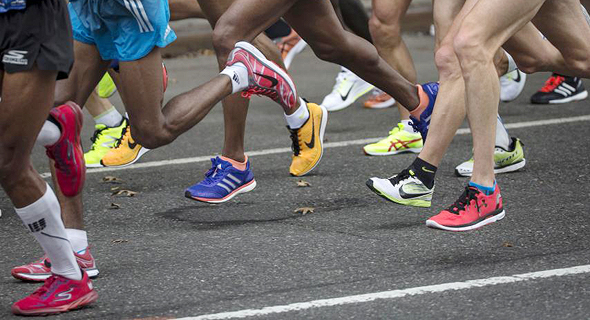 For example, Kipchoge, who ran under stringently controlled conditions, wore Nike's new ZoomX Vaporfly shoes, which, according to a new complaint filed with the International Association of Athletics Federations (IAAF), provide an unfair advantage to competitors. According to Nike, the shoes include a carbon fiber plate and a midsole made from ultra-light foam, advances that supposedly reduce the energetic cost of running by 4%.

Surprising to many, these same purists do not seem to have an issue with many other innovative technologies used by today’s athletes. Is it fair to compare the winning 100-meter dashes of Jesse Owens, the pre-World War II Olympian, with Usain Bolt given the huge differences in their training regimen, their equipment, and even the track that they ran on?

Like track and field, many sports have a love-hate relationship with those innovative technologies that seem to dilute the role of human athleticism. For example, there are clear cut cases of technologies that are banned, such as anabolic steroids and human growth hormones favored by baseball players in the past few decades, while other enhancing technologies, such as corrective eye surgery for golfers are allowed.

Generally speaking, why do the purportedly illegal human enhancements often trigger a near-universal and visceral negative reaction while legal enhancements do not? Some suggest that this response relates to an age-old distinction that athletic fields make between the non-trivially defined natural and unnatural. Ironically, some superhuman feats are allowed, provided that they are natural, as is the case with athletes with a genetic predisposition to excel in sports.

Arguably then, this inherent injustice in sports—unfair human enhancement—doesn’t stem simply from the other side somehow gaining a prejudicial advantage, but rather, specifically when that unfair advantage, employed during an actual match, causes the side that ostensibly played (more) fairly to lose what should have been theirs to win. It is telling that fairness in sports is often referred to as a level playing field: as long as the actual game seems fair, other unfairness off the field might be allowed.

To wit: when it is simply training tools that result in training benefits, technologies tend to be allowed. This can be seen most cogently in the continued tolerance for expensive and exotic apparatuses such as cryo saunas or altitude tents. Doping, however, seems to always be problematic: particularly when it or its immediate effects remain in the bloodstream during the game or match.

Similarly, there are ongoing complaints regarding the records set by Canadian female cyclist Rachel McKinnon. McKinnon is a transgender athlete and her detractors claim that the benefits of her male puberty are still in effect even after her transition. In support of the aforementioned hypothesis, in contrast to the Union Cycliste Internationale (UCI), the Olympics, which has allowed transgender athletes to compete for nearly two decades, requires that athletes in women’s competitions have suppressed testosterone levels for at least a year prior to competition.

Even more astounding, allowable unfair training includes those instances where financial wherewithal and independence to train affords only a select subset of players the best trainers, training tools, and training opportunities. Although it does not seem to have helped the New York Yankees that spent nearly $2 billion to win zero titles within the past decade.

It seems that only when that financial wherewithal translates into differences on the actual field, do ruling bodies step in, as was the case with the relatively unaffordable and unavailable Speedo LZR Racer swimsuits that were only accessible to a subset of competing athletes.

Until recently, most of the concerns relating to doping and enhancement have been academic, or at most, dealt with internally via various sporting organizations. But things are changing. Germany introduced prison sentences for doping athletes in 2015 and late last year China decided to make doping a criminal offense. Most recently, the U.S. House of Representatives passed the Rodchenkov Anti-Doping Act aimed at making it illegal to subject athletes to doping schemes and aims to extend U.S. jurisdiction internationally to any event where there are three or more U.S. athletes or financial support or sponsorship from a U.S. based organization.

Notably, the bill, which carries penalties of up to 10 years in prison and fines of up to $1 million, excludes athletes from culpability. This is both because the bans imposed by athletic organizations are supposed to be enough of a disincentive, but also because it was thought that athletes would not whistle-blow on doping organizations if there were criminal penalties for their involvement. It may also be due to the unstated goals of the law: to counteract nefarious doping conspiracies that often also include bribery and money laundering, and to protect the half-trillion-dollar U.S. sporting industry, and not necessarily to make gameplay fairer. In contrast, the World Anti-Doping Agency (WADA) has a strict liability policy once banned substances are found regardless of intent or fault.

Not everyone is against technological enhancement in sports. The upcoming Cybathalon is intended to be a sporting event for people with disabilities, showcasing various technologies like exoskeletons and brain-machine interfaces that enhance their abilities.

This type of event with a specific focus on sports technologies could even lead to new types of sports that showcase extreme technological enhancements that would otherwise be shunned in regular sports, such as shoes that can give you superhuman speed.