Clashes With Gaza Are Still Ongoing, But History Shows Their Effects on Israel’s Economy Will Likely Be Minimal

On Tuesday, large parts of Israel were paralised with many businesses shut down, due to ongoing aggression between Israel and Gaza

TAGS:
On Tuesday, large parts of Israel were paralyzed with many businesses shut down by order of the Israeli Home Front Command, due to ongoing aggression between Israel and Gaza. On Monday night, an Israeli aerial strike on Gaza killed Islamic Jihad commander Bahaa Abu al-Atta and his wife, drawing heavy rocket fire directed at Israel in response. Unlike most flare-ups in Gaza, the current response reached beyond Israeli southern towns, disrupting life in the greater Tel Aviv area, Israel’s business and commerce center. While it is still too early to estimate the financial repercussions of the current round, as it is still ongoing, research and previous experience hint that they will not be dire.

In March 2015, the Bank of Israel released a study that looked into the impact different military events had on the Israeli economy. According to the study, the 2006 Lebanon War caused a loss estimated at between 0.35% and 0.5% of Israel’s gross domestic product (GDP). In current terms, that means between NIS 4.8 billion and NIS 6.86 billion (approximately $1.3 billion-$1.95 billion). 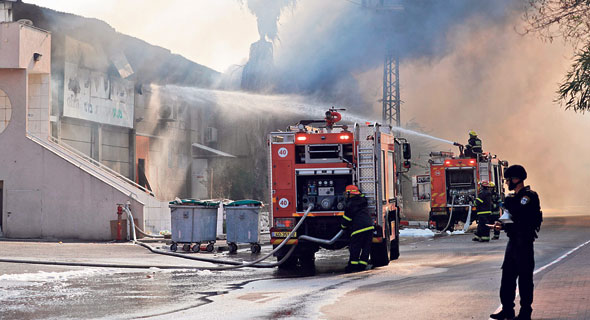 The most important finding, however, had to do with the 2014 Israel–Gaza conflict, termed Operation Protective Edge by Israel. Lasting 50 days, the Gazan response reached the greater Tel Aviv area then as well, throwing much of the country into lengthy disorder. The damage was estimated by the Bank of Israel as 0.3% of the GDP, NIS 4.1 billion (approximately $1.17 billion) in today’s rates. Both conflicts, therefore, prompt the same conclusion: even serious security events have only a minor impact on Israel’s economy.

The 2015 study revealed that such events affect Israel’s economy by exerting downward pressure on demand rather than on supply. The bank’s economists did not detect a significant impact of fighting on industrial manufacturing in Israel, but rather a negative impact on private consumption and on tourism, both of which are taken into account when calculating Israel’s services export. The good news is that the research also showed that the Israeli economy manages to bounce back from fighting relatively quickly. For example, households that refrained from shopping or eating out during those times “made up for it” by spending more in the following months.

Private consumption expenditure accounts for around 60% of Israel’s GDP, and as such is a major growth engine of the economy. According to the study, it slowed during the 2008-2009 Gaza War, dubbed Operation Cast Lead by Israel, and Operation Pillar of Defense, a week-long Israeli campaign in November 2012; stalled during the 2006 Lebanon War; and fell during the 2014 Israel–Gaza conflict. The bank’s economists place the blame on a decrease in two main components of services consumption—transportation services and hospitality—though like all other aspects of life, Israeli services consumption also recovered quickly.

A deeper look at industrial manufacturing, however, shows a more nuanced picture regarding the effects of military escalation. Israel’s tech industry has not shown a dent during military conflicts—good news for Israel, as the tech industry accounts for 37% of Israel’s industrial export. It is Israel’s most productive industry and the one paying the highest wages.

Other industrial manufacturing activities were impacted on a case-to-case basis, depending on the nature of the specific conflict and its geographical reach. The Israeli petroleum and chemical industry, which is located mostly in the Haifa bay in northern Israel, was significantly affected during the 2006 Lebanon War, but a conflict that affects Israel’s south and center will not have a big effect on this industry. Traditional manufacturing branches stayed stable during the 2006 Lebanon War and suffered a mild impact during the 2014 Israel–Gaza conflict.

But unlike the 2006 Lebanon War and the 2014 Israel–Gaza conflict, a prolonged paralysis of both Israel’s south and its center—which is what will happen if the current fighting drags on—will have more severe repercussions than the paralysis of just Israel’s north or south. According to data from the Manufacturers Association of Israel, 46% of Israel’s industrial revenues and 49% of the country’s industrial export revenues are based on three regions: Israel’s southern district, Tel Aviv, and the greater Tel Aviv area.

Israel’s most vulnerable industry during military conflict is tourism. In 2018 it had a turnover of $7.2 billion—14% of the country’s services exports and 7% of total export. The good news is that incoming tourism is at a record high. According to the Israel Hotel Association, occupancy jumped 48% over four years. Data by the Israeli Ministry of Tourism reveals that tourism, including in-country tourism, contributes NIS 30 billion to the GDP. While a negative impact on tourism will not affect Israel’s GDP dramatically, however, it will have other impacts as around 150,000 people are employed in the industry, most of them of lower economic status.

It should be noted that since the Second Lebanon War and the 2014 Israel–Gaza conflict, there was a sharp increase in the contribution of services export to Israel’s total export, and it is now nearing 50%. That could prove critical for Israel’s economic stability during prolonged military conflict, as services export, unlike the export of physical products, are easier to supply during war.