Coworking Sector Is not Just About WeWork, Says Mindspace CEO

Dan Zakai and Yotam Alroy, co-founders of Israeli coworking real estate company Mindspace, spoke to Calcalist about the trends and turmoils the coworking industry is undergoing

TAGS:
The coworking sector is bigger than just WeWork, according to Dan Zakai, co-founder and CEO of Israeli coworking real estate company Mindspace Ltd. Zakai believes WeWork’s recent woes will no doubt have a future impact on the sector but says that right now, demand for shared office space is still very high and that new players continue to enter the market. “We have locations all over the world and we are at 90% capacity or over in all of them,” Zakai said in a recent interview with Calcalist. Post WeWork, people are beginning to realize that not anyone can enter the coworking sector and make it, so, less stable players are starting to drop, he added. When Zakai, together with Yotam Alroy who serves as Mindspace’s chief of business development, founded the company in 2013, it was the only coworking company in Israel. Mindspace opened its first site on Tel Aviv’s Rothschild Boulevard, a luxurious and picturesque street at the heart of the city, and has since expanded to 30 sites in seven countries where it employs around 100 people. “We chose to stick to premium locations in major cities and were able to attract companies both big and small, from those employing only several people to those with hundreds of employees,” Zakai said. 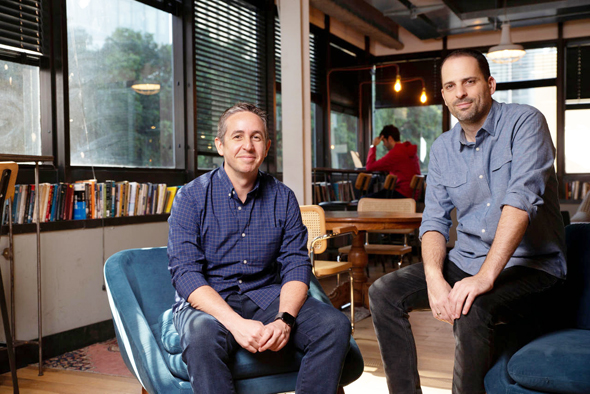 Mindspace co-founder Dan Zakai and Yotam Alroy. Photo: Avigail Uzi
“What we were beginning to see at the time was a shift in the office real estate market, where there was suddenly demand for space that was more than just walls and a floor,” Alroy said. At the same time predictions were that freelance workers will make up half of the future workforce and this was the main market we were looking at, he added. From day one, however, he said, it became apparent that big companies will become essential. Alroy is also unconcerned with the WeWork effect. Analysts and brokers are of a single opinion that what started out as a trend is now a permanent product in constant demand and that by 2030, the number of flexible spaces will grow from 2% of all offices worldwide to 30%, he said. “More and more renters are looking to give their employees something extra but they either do not know how to do it themselves or are afraid to be bound by long contracts,” he said. There was a lot of buzz and every other person was opening a coworking company, but at the end of the day, there are not too many players that can handle the level of service required to cater to both giants and startups, he added.

A Mindspace location in Hamburg. Photo: Boaz Arad
What happened to WeWork was a case of shining too bright for too short a time, Zakai said. This led to a lack of focus and engagement in other types of business activities, which ended up becoming a financial burden, he said.

Perhaps the best known of coworking companies, WeWork lost $1.25 billion in the third quarter of 2019, more than double its $497 million in losses recorded during the same period last year, according to November reports by several media outlets. WeWork, which rebranded as the We Company earlier this year ahead of its disastrous attempt to go public, opened 97 new sites and expanded to 16 additional cities during that quarter, its biggest quarterly expansion to date, according to Reuters.

It is impossible to fill up locations at the rate WeWork was opening them and be profitable, and many of the company’s sites had low occupancy or were rented out for cheap, Zakai said. WeWork wanted to exhibit good numbers for its initial public offering, but it ended up causing losses, he added. “They took a good model and just got lost trying to speed up the IPO.”
Related stories:
Mindspace’s business model is different. Instead of raising money and leasing space to establish new locations, it partners with real estate owners, helping them establish a co-working space, according to their budget. “The owner provides the funding and we operate the working space,” Zakai said. According to him, building owners are beginning to realize they need a coworking space at every new project and that a significant portion of the demand for real estate is a demand for flexible spaces.

About half of Mindspace’s tenants are big companies, according to Alroy. The advantage with big companies is that they provide deals for several years, unlike smaller companies that prefer to sign on a month-by-month basis, he said. Big companies do not want to work alone, Alroy said. “In Herzliya, we have 3,000 square meters leased out to Microsoft and a similarly large space occupied by many small companies, and they all end up collaborating,” he said.