An audio sign that helps people with impaired vision travel using public transport, a touchless system for controlling smartphones, and a smart robotic wheelchair—these technological developments that are changing the lives of those with disabilities and influencing their surroundings

TAGS:
"Assistive technology has the potential to dramatically change the lives of people with disabilities and enable them to enjoy a healthy, independent, and dignified life while integrating into and contributing to all areas of life such as employment, education, and recreation," according to Patricia Lahy-Engel, senior director of social research and development at the Innovation Authority. Approximately 20% of the world's population has some form of disability. Innovative technological developments, designed with the support of the Israel Innovation Authority, allow them access to different services and helps them enjoy a better quality of life. 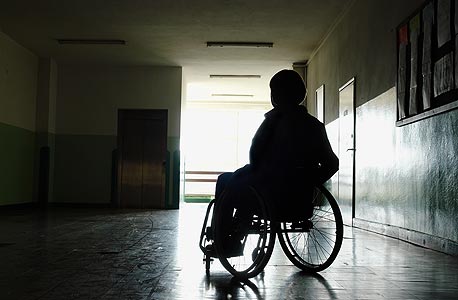 Disability (illustration). Photo: Shutterstock
A report published by the Innovation Authority on impact investment reviewed three Israeli startups, Step-Hear, Sesame Enable, and ReSymmetry, which invented technological developments that are changing the lives of people with disabilities and influencing their surroundings. "The Innovation Authority supports these technological developments as part of the 'assistive-tech' program, which focuses on assistive technologies for people with disabilities, in conjunction with national insurance funds," Patricia Lahy-Engel said in the report. "The Israeli high-tech industry cannot exist as a bubble removed from the country itself,” Naomi Krieger Carmi, head of the societal challenges division at the Innovation Authority, said. “Innovation must encompass all parts of the country and society. An initiative's social objectives must be accompanied by economic worthwhileness, otherwise its impact will remain unfulfilled dreams and aspirations. This is precisely the importance of the authority’s impact innovation programs."

"The best way to provide visually impaired people with a sense of security in the public domain is by activating an audio sign," explained Shiran Hermon, global marketing and business development manager at Step-Hear Ltd., a subsidiary of Mehalev-The Israeli Center of Accessibility in Communication, which was founded a decade ago with the aim of designing technological solutions for the blind and visually impaired. "We have developed a fixed loudspeaker that operates with an app or that is activated wirelessly when a person enters a bank, hospital, bus stop, etc., and lets him know exactly where he is.” "The company was originally founded to provide solutions for people with vision impairments, but today offers more general solutions for a range of problems. Some of our achievements have been in the field of public transportation. We successfully led a pilot together with the Ministry of Transport and the current goal is for full nationwide assimilation into the public transportation system,” Hermon said. “Earlier this year we received a certificate of appreciation from a project called ‘Zero Project’ for our smart technology in the field of accessibility. We operate in Russia, Romania, Australia, Germany, the U.S., Poland, Turkey, and France, and are continuing in our worldwide efforts towards global distribution." The Step-Hear system is based on an app operated by the user. The audio sign is installed by businesses looking to make their service accessible. The business owner can also decide whether to add elements from existing systems to the audio sign to make them accessible. Apart from the audio sign, which explains the user's surroundings to him, the app also includes an internal compass capable of providing audio information about things in the surrounding area according to changes in the direction the telephone is held. For example, after passing an audio sign leading to the relevant department at Assaf HaRofeh Hospital, the app will inform the user that the nurses' station is located to his or hers right, or that the patient wards are 20 steps ahead. “In the field of public transportation, our development enables communication and connection between the driver and passenger, thereby improving accessibility,” Yishai Hatzir, Step-Hear’s research and development and operations manager. “For example, when the user approaches the bus stop, he can activate the audio sign and listen to a list of all the different transportation lines' arrival times or send a message to the driver that he is waiting for the bus. The pilot, conducted with the funding of the Ministry of Transport, won us the Simcha Lustig Access Israel Prize," Hatzir said proudly. "We are happy to be part of the technological future and aspire to lead a revolution by becoming a type of Waze for people with disabilities," says Hatzir. "The initiative was born thanks to the grants we received from the Innovation Authority. The Authority's support is not only financial. Its reputation has helped us open doors among international entities or at the Ministry of Transport, and serves as a certificate of esteem or proof of reliability, helping us to dramatically expedite many bureaucratic processes."

Technology that Overcomes the Obstacle of Touch

The Sesame Enable corporation was founded to provide a solution for people with disabilities who find it difficult to use touch technology. "Our technology overcomes the touch obstacle," CEO Rowee Benbenishty said. "We have developed a unique technology that uses the device's camera to track the user's face, thereby giving him complete control over the device via the movements of his head. The company's vision is to lead assistive technology as a bridge between people's existing physical capabilities and the needs of technology. In other words, our goal is to create an alternative means to communicate with and consume information from a smartphone, tablet or computer for anyone unable to touch them.” This technological development is based on a game that Oded Ben Dov, the company's chief technology officer, promoted at a previous company. The game, operated by means of hands and head movements, was presented on a technology oriented television program. The following morning, Oded received a telephone call from an engineer suffering from a spinal injury, who asked him to create a mobile phone that he could use. A meeting between the two highlighted the value this technology had for people in the same condition, and they applied for one of the Innovation Authority's programs to prove the feasibility of a design based on the technology and to embark upon its initial development, Benbenishty explained. "We have advanced since and two years ago we opened a subsidiary company in the U.S. that engages in marketing and sales." "The app is adapted to Android and Windows-based devices, and we also know how to make it accessible via other technologies, to add it to an existing product, or to use it on different websites," Benbenishty explains. Adapting the app to Windows was made possible thanks to the third Innovation Authority program that Sesame Enable participated in as part of the 'assistive-tech' program. "Several months ago, we began offering Sesame Enable as a head movement tracking service on internet websites," Benbenishty says. "The app can be downloaded anywhere in the world. We even have users in Saudi Arabia, Iran, and Australia. The Israeli market is small and from the outset we realized the need to expand abroad. That is why we chose to conduct our marketing and sales operations abroad even though the product itself is developed in Israel, a decision that necessitates large budgets that a company such as ours simply doesn't possess in the initial development stages," Benbenishty said. Sesame Enable receives emotional feedback from its users. People who completely lost their social independence due to their injury can now progress to a stage where they have full control and an interaction with technology, friends, and family. For them, the ability to make a private phone call alone is not something to be taken for granted. "We have users who, thanks to our application, can read books or watch movies again. Some are children who can suddenly use Facebook or receive homework just like the other kids in the class," Benbenishty described.

For more than 20 years, occupational therapist Efrat Shenhod-Malihi worked to adapt rehabilitation and mobility devices for children and adults who suffer from a physical disability that restricts their movement. In recent years, she specialized in an interventional method called 24-hours postural management and treating the musculoskeletal system of people with disabilities. With her years of experience, she understood that many spine-related conditions such as thigh problems, scoliosis, muscle contraction, and others are caused by prolonged sitting periods that can also influence internal physiological systems such as the respiratory and digestive systems. "While prolonged sitting also creates problems for healthy people, they can exercise to preserve their health. A disabled person does not have this privilege," Shenhod-Malihi explained. This insight led her to develop a unique reactive wheelchair system that makes sitting more effective, is adjusted to the user's physical disability, and preserves his or hers health. The ReSymmetry corporation, founded in 2016, develops smart robotic wheelchair systems that integrate movement into the sitting posture. The reactive system changes its shape, causing the user to adjust his posture so that he moves even while sitting in a wheelchair. At the same time, the system is equipped with sensors that measure different things, such as the level of pressure exerted while sitting in a specific position for an extended period of time. The chair reacts to the user and alters his position to reduce the level of pressure and the risk of developing pressure wounds. "In general, our development focuses on the person sitting in the chair, on the ergonomics of the body, and not on the chair itself," Shenhod-Malihi explained. "After developing the initial prototype, we progressed to the clinical trial stage that is overseen by Professor Eliezer Carmeli, the physical therapy department chair at the University of Haifa and the company's scientific advisor. These trials revealed a significant improvement in all the standard indices, and even after we finished the trial no regression to the original level was recorded."
Related stories:
“The innovative robotic system will be assimilated into a regular motorized wheelchair and our hope is that every disabled person from children to the elderly, will have a reactive postural system with which he can participate in daily life, both at home and in the community. Rehabilitation robotics is presently used mainly in laboratories or rehabilitation institutions, and, except for prosthetics, is not yet implemented in daily functional use at home. Our goal is to introduce the use of robotic rehabilitation into the home as a useful functional-therapeutic daily tool," Shenhod-Malihi summarized.

"Following the Innovation Authority's investment, we developed five improved prototypes with postural attributes that are entirely different from existing ones or the previous prototype," Shenhod-Malihi emphasized. "We are presently at the patent registration stage and have already begun discussions with local medical institutions to introduce three chairs into clinical trials here in Israel. We have won awards in three competitions. Two of these granted us monetary prizes while the other competition, in which we won sixth place, gave us exposure to the Chinese market. We have also received investments from the Innovation Authority and other private angels," said Shenhod-Malihi.

The article was written in collaboration with the Israel Innovation Authority, the Israel governmental tech investment arm.