TAGS:
On Sunday, Israel’s Ministry of Finance released data about the country’s universal Savings for Every Child program, in operation since 2017 and intended to decrease multigenerational poverty. Under the program, the state deposits NIS 51 per child each month in a personal savings account until the child reaches 18 years of age, enabling parents who wish to do so to boost the account with an identical deposit. So far, NIS 7 billion were accumulated throughout the program, according to the ministry, which proudly stated Sunday that the option of choosing between several investment channels could increase the initial deposit by as much as 277%.

On Monday, Jerusalem-based think tank The Taub Institute for Social Policy Studies published its annual State of the Nation Report for 2019. In it, the institute rained on the finance ministry’s parade, stating that the saving program in its current format could work to increase societal polarization, not decrease it. The authors stated that while an analysis of the use patterns of the program shows that it is expected to provide average savings of around NIS 24,000 per child, there is doubt whether the sum is sufficient to improve the social mobility of children born to low-earning large families. 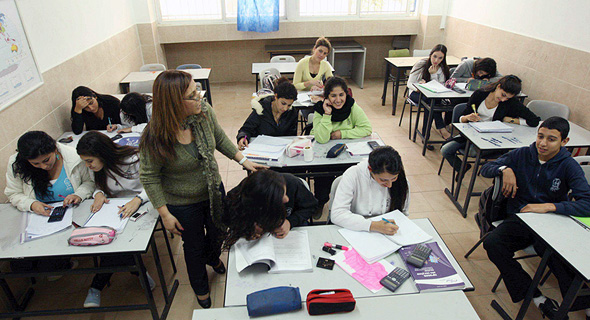 Second grade students, Israel. Photo: Gadi Kabalo
This is primarily because less than a third of parents in the bottom two income deciles supplement the state deposit, compared to 65% of parents in the top two deciles. Second, Taub researchers found that the investment channel parents choose could play a major role. Of the parents in the top two deciles, 60.9% chose higher-yield, higher-risk channels, but only 28.5% of parents in the bottom two deciles chose to do so. On Sunday, the finance ministry referred to this finding by concluding that financial education must be boosted among weaker populations. The Taub report authors, meanwhile, concluded that the framework of the program itself must be changed. Taub’s 2019 report touches on a few other aspects of the Israeli economy and society. This year is expected to end with an annual growth of 3.1%, lower than past years but still good on an international scale. In terms of per-capita gross domestic product (GDP) growth, however, that is only 1.1%, low compared to the OECD average. The good news is that this growth is more apparent in the lower-income deciles compared to countries like the U.K., the U.S., and Germany: between 2012 and 2017, the income of the bottom four deciles rose by 3.6%-4%, while the income of the top two deciles rose by 2.6%. Overall, the income of Israeli households rose by 3.3% during the period. Another finding reported by Taub is that in recent years, the rate at which Israeli consumer prices rose has slowed down to a rate more comparable to other OECD countries. In the past, local prices rose when prices abroad rose, but the local market was slow to act on foreign discounts. As of 2014, however, regulatory changes in Israel and an increased reliance on e-commerce created increased competition in the local market. Despite these improvements, prices in Israel are still 12% higher than those expected for an economy similar to Israel, according to Taub.
Related stories:
Regarding social elements, Israel’s poverty rate is 23%, lower than the OECD average of 28%. However, according to Taub, in terms of disposable income, Israel and the U.S. top the list with a poverty rate of 18%, compared to the OECD average of 12%. While Israel lowered the poverty of its senior population between 2015 and 2017 from 42% to 20%, the OECD average saw a drop from 69% to 13% during the same period. Taub also stated that unlike other OECD countries, in Israel higher education boosts income only among those who are already high earners or of higher socioeconomic classes. Low earners with higher education fail to receive a real income-related benefit from it due to low skill levels—which for low earners are worse in Israel than the OECD average. According to Taub, these findings highlight the limitations of higher education in closing social gaps and the need for educational reforms for earlier education stages in Israel. Low earners and those of lower socioeconomic groups are also much more at risk of being replaced by computers in the next decade or two, according to the report.