Israeli pupils are still underperforming compared to the OECD average. Experts attribute the failure to the country’s outdated education system and the lack of quality personnel, and warn that it is only going to get worse

TAGS:
On Tuesday, the results came in for the 2018 Programme for International Student Assessment (PISA), a global study conducted by the OECD that measures the scholastic performance of 15-year-olds in terms of reading, math and science, and they were not pretty. Israel's failure was double: results for Jewish students did not improve, remaining mediocre at best. On top of that, results for students from Israel's Arab minority dropped, creating the largest gap to date between the scores of Jewish students and the scores of their Arab counterparts. To make matters worse, the budget allocated to the Israeli education system doubled in the past decade, from NIS 32 billion (approximately $8.9 billion) in 2009 to NIS 62 billion (approximately $17.8 billion) in 2019.

The OECD holds the PISA once every three years to test student readiness for the job market, and today it is considered the main stamp of approval for a country's level of education. The 2018 test spanned 78 countries and over half a million students. Between 2006, when Israel first partook in the test, and 2012, the country showed rapid improvement from an average of 445 for all three subjects to 474. But since then, Israel's results dropped to 470 for reading, 463 for mathematics, and 462 for science, mostly due to the poor performance of Arab students, reflecting a serious problem within the education system. For comparison, the OECD average foe 2018 was 487, 489, and 489, respectively. 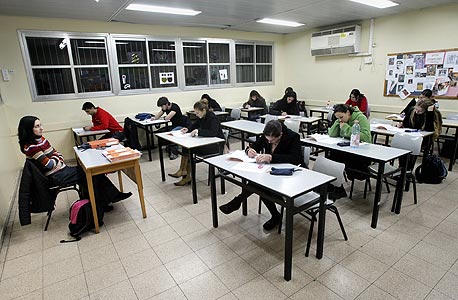 Across all three subjects, Arab students showed a drop of 22 points on average, leading to an average gap of 124 points between Jewish and Arab students. Over half of all Arab PISA participants were classified as struggling at all three subjects, compared to 12% of Jewish participants. At the same time, the number of Arab students in Israel that graduated from high school rose from 44% in 2009 to 65% in 2018, and inner-country surveys that test the level of education at schools have also shown a significant increase in scores of Arab students.

The Israeli Ministry of Education, therefore, was so surprised by the PISA results that it asked for a recount, which turned out to be the same. Ministry officials were rightly caught off guard, as affirmative action initiatives saw another NIS 400 million ($115 million) allotted to education programs for the Arab minority in Israel, programs that were targeted at the age group tested in the most recent PISA. The conclusion, therefore, seems to be that the various in-country tests only check how well the knowledge is imparted, while the PISA tests whether the students can implement said knowledge.

Andreas Schleichher, the division head and coordinator of the PISA and the OECD Indicators of Education Systems programme, gave a similar explanation in a March interview with Calcalist. Israeli students are adapt in memorizing and repeating the learned material, but not many are good at using that knowledge to form new ideas the way scientists and mathematicians do, which is what the PISA tests, he said.

Many professionals believe that Israel's middling results are due to an outdated system and a shortage of quality educators.

Zvi Peleg, the director-general of education network Ort Israel, told Calcalist that "we are strong in investments and weak in results. There is enough money in the system, but when the network starts to operate in local municipalities it faces very difficult challenges, including a lack of skilled teachers and a difficulty in building the management layer."

Avi Kaminski, chairman of the Israel Union of Education, reiterated the problem of finding quality teaching and management personnel, adding that the poor social status of teachers in the Israeli society drives people away. Another problem, he said, is that many of the funds invested in the system in recent years were not the result of a strategic plan but a knee-jerk reaction to the 2011 nation-wide protests calling for “social justice.” What Israel needs, according to Kaminski, is a national overseeing body and a 10-year national strategic plan that will not be subject to the whims of changing ministers.

It does not matter how much money you invest because the teachers are still stuck in the 20th century, said Ali Shalalha, the former principal of the Beit Jann Comprehensive School, serving an Israeli Druze community in northern Israel, considered a part of the country’s Arab minority. Several years ago, Shalalha made global headlines when every senior in his school graduated, placing the school number one nationally, when a decade and a half earlier only 12% of seniors graduated with a high school diploma. Teachers, he said, teach kids the material but do not promote creative thinking. "Many times, principals are also of the opinion that students should be taught how they themselves were taught."

Nasreen Hadad Haj-Yahya, director of the Arab-Jewish Relations Program at the Israel Democracy Institute, is also of the opinion that the quality of education is declining because the low wages chase away quality educators. Parliamentarian Yousef Jabareen of the Joint List, which is composed of the four dominantly Arab political parties represented in the Israeli parliament, however, said that "decades of discrimination cannot be fixed with just a few million shekels."

Israel also showed a very large gap between students of high socioeconomic background and those of low socioeconomic background—a gap of 114 points in reading, 99 points in math, and 103 in science, all of which increased since the last test in 2015. In fact, Israel is in the unfavorable first place among PISA participants when it came to the divide between the strongest and weakest students.

11% of Jewish students excelled in mathematics, the same percentage as the OECD average. This might explain where the country gets its fabled tech talent, and also why there is just not enough of it.

Most excelling students are male students from central Israel, explained Eli Horowitz, the head of the Trump Foundation, which promotes math studies in Israel. "That is the group that is later recruited to Unit 8200, studies engineering at universities, and works in the tech sector." He thinks the Israeli education system needs to increase the number of its advanced math classes, enabling more students to benefit from higher quality education.

Israeli minister of education Rafael Peretz announced following the results that the ministry will set up a team to create a plan for strengthening the level of education provided to the country's Arab minority. While such a plan is welcome, it ignores the fact that many of the faults the PISA shed light on affected the Israeli education system as a whole. The 2021 tests are expected to emphasize not just creativity, but the math section will have additional questions intended to test tech-related skills such as probabilistic and critical thinking—and, as always, stress the importance of implementing knowledge rather than the knowledge itself. If the Israeli education system will not undergo a revolution within the next two years—and such a revolution is almost impossible to carry out in such a short time—Israel's results are only going to get worse.