As Israel’s Airlines Are Grounded, so Is Export

Most of Israel’s imported goods comes by sea, meaning food shortages are not expected, but 60% of the country’s export is sent via passenger flights—now grounded due to coronavirus

The damage Israel’s economy will incur as a result of the coronavirus (Covid-19) now has a number: NIS 4.4 billion (approximately $1.24 billion) a month, according to Shira Greenberg, the chief economist of the Israeli Ministry of Finance. Around NIS 500 million (approximately $140.9 million) of that is the result of work hours lost due to quarantine; some 70,000 people are now estimated to be in home-quarantine following a Monday government decision that mandated all those returning to Israel must seclude themselves for 14 days.

Israel’s services export is expected to see damages of NIS 1.9 billion (approximately $535 million). Total export of services in 2019 amounted to $55.4 billion; this includes tourism, which brought in $7.6 billion in 2019, and export of tech services, which brought in almost $30 billion. Both subsectors are very dependent on open skies—and Israel’s sky movement has dwindled to almost zero in recent days as containment measures increased. 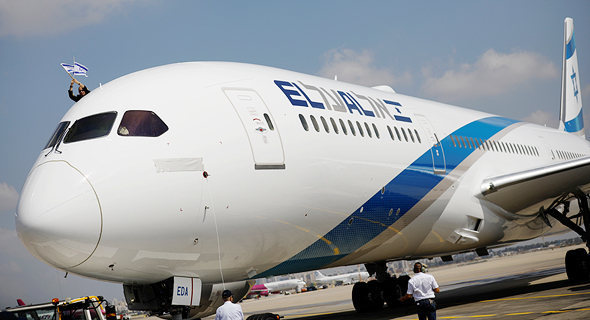 El Al. Photo: Reuters
Export of goods is expected to see damages of NIS 1.3 billion (approximately $366 million). Lower consumption of goods and entertainment in Israel is expected to create a gross domestic product (GDP) loss of NIS 0.7 billion (approximately $197 million). Assuming the situation does not deteriorate further, the finance ministry estimates that the overall loss to Israel’s GDP will amount to 1%, or around NIS 14 billion (approximately $3.94 billion), meaning growth will stand at 1.8%-2%. Growth per capita, therefore, is expected to be minuscule. These forecasts are based on a scenario in which a global recession does not occur and control of the pandemic is achieved by the third quarter of 2020. Why is the impact on export expected to be so significant if Israel’s ports are still open? According to data released Tuesday by the Manufacturers Association of Israel, 66% of Israel’s export in 2018 was sent by air, though this is still a drop from 67.2% in 2017. Only a third of exported goods is sent by sea. It should be noted that 36% of Israel’s aerial export pertains to the diamond industry, which contributes little to Israel’s economy in terms of employment and taxes. A third of aerial export, however, is machinery, pharmaceuticals, and optic equipment—three tech subsectors characterized by high economic productivity. Import to Israel is a mirror image. Two-thirds of Israeli imports come by sea, and only a third by air. Of the third imported by air, 28% is by the diamond industry, meaning less than a fourth of economically significant import is by air. These statistics could explain why the Israeli Ministry of Economy was quick to assure the public that no shortages were expected for food or raw materials. However, around $5 billion worth of pharmaceuticals and another $12 billion worth of electric, mechanic, and optical equipment and devices are imported via air, meaning that while shortages are not expected, supply disruption could be experienced if the crisis persists. The U.S. receives 30% of Israel’s aerial export, while Europe receives 23.6% and China 10%. When it comes to aerial import, 21% comes from the U.S., a third from Asia, and a third from the European Union. The data provides a reason for the government’s concern over the coronavirus-related financial troubles the country’s national carrier El Al Israel Airlines Ltd. is experiencing: around 60% of Israel’s air export is currently sent via passenger flights, compared to 44% in 2015, and over 35% (by weight, not valuation) of this transport is performed using El Al planes. As the coronavirus crisis is a global rather than a domestic one, the government can only control its impact on the Israeli economy so much. If the world enters a recession period, the demand for Israeli goods will drop, and with it the income of companies and households and their expenditures—directly affecting taxes. The government can mitigate some of the damages, however, and it has already started to do so, via a government assistance fund.
Related stories:
The state has also announced it will support employees put on leave without pay as a result of the crisis. Current data shows that 10% of the unemployment payments made by Bituah Leumi, Israel's national social security agency, which currently stand at NIS 3 billion (approximately $845.5 million) overall, are now slated for employees on unpaid leave. Estimates are that the sum will rise as the crisis progresses, though it is still too early to estimate the final numbers. “If the crisis ends quickly and the damage will be limited, we cannot forget that the economy is in a very fiscally precarious position, and incorrect use of resources at this time could hurt Israel’s credit rating,” a senior finance ministry executive told Calcalist Tuesday on condition of anonymity. It is important to do things by the right measures, he said: “we won’t let any airline collapse, especially not El Al. However, it is important that the companies themselves understand that, at the end of the day, these are public funds, and they are not meant to support inflated, inefficient companies.”