When It Comes to Covid-19, the Tech Industry's Urge to Disrupt May Be Disruptive

As the world attempts to fight off the global pandemic, tech professionals worldwide should focus less on disrupting the health system than on supporting it

Tech entrepreneurs often pride themselves in the thought that the technologies they develop make the world a better place. This cliché is so overused that it has become a recurring joke in popular culture, perhaps most prominently in HBO’s tech world sitcom Silicon Valley. But the current coronavirus (Covid-19) crisis and the challenges it brings with it seem to finally give companies and developers an actual chance to make the world better or, at least, less bad. However, it is also worth considering if, in its well-meant efforts to disrupt the coronavirus pandemic, the tech industry might do more harm than good.

When it comes to technology companies in the Covid-19 era, most of the attention has been drawn to the ways in which they deal with the pandemic’s effect on their day to day operation—cutting back on non-essential activity, transitioning to remote work, postponing product launches, and canceling conferences, to name a few—or their shady assistance to governments in developing civilian surveillance tools to help monitor, and hopefully halt, the spread of the virus. At the same time, however, quite a few developers and tech entrepreneurs decided to harness their skills to fight off the disease by developing anything from digital analytics tools to physical medical devices. 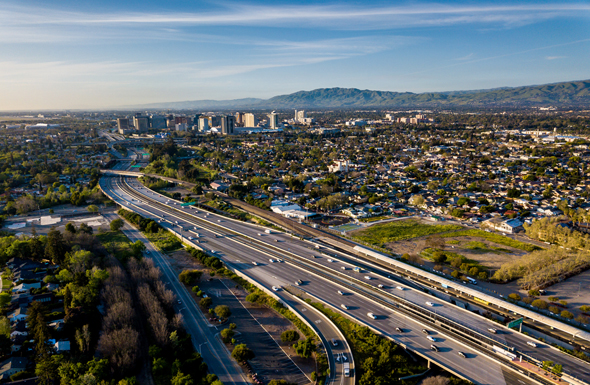 Silicon Valley. Photo: Shutterstock
According to the Wall Street Journal, in the past two weeks, thousands of tech professionals—especially in the San Francisco Bay Area, which was among the first in the U.S. to implement lockdown—began working on small Covid-19 projects on their own time. Some are developing apps for helping the elderly get food supplies without leaving the house, while others are working to help medical staff get the equipment they need. One extra ambitious project is organized by investor Sam Altman, who hopes to produce 1 million well-needed low-cost medical ventilators within several months Instagram founder Kevin Systrom is using his experience in internet virality and data science to predict the spread of the virus. Systrom told the Journal he felt most existing predictions were either too lenient or too harsh and he felt there needed to be a more accurate model. Using his system, Systrom managed to predict the U.S. would reach 10,000 confirmed cases by March 19 and he now predicts it will reach over 250,000 cases by early next week. Tech giants are also trying to do their part and Google’s artificial intelligence company DeepMind, for example, is working on identifying a vaccine. Some of these efforts have already seen a slap in the face as they were shut down due to non-adherence with existing medical safety regulations. It is possible that Altman’s project will also fail to meet the U.S. Food and Drug Administration (FDA) standards, letting the fortune he already spent go to waste.
Read more:
Tech people believe, some would say blindly, in technology’s ability to solve every issue, by disrupting outdated industries and injecting them with new lifeblood. When reality sets in, however, this notion blows up in their faces time and time again. Facebook, for example, was created to connect the world and instead became a conduit of fake news and hatred, pushing people and groups to shut down to the world and converge into their own online communities. Another, in a line of many examples, is Uber that set out to solve transportation issues in large cities and ended up making them worse. In one of his famous three laws, British science fiction writer Arthur C. Clarke, stated that any sufficiently advanced technology is indistinguishable from magic. This statement may encourage belief in tech’s unlimited power but it is important to remember that technology is not magic, it is just a tool—a powerful, versatile, multi-purpose tool, but a tool nonetheless. There are no magic solutions for pandemics and, in the end, no technology is going to single-handedly stop Covid-19, just as no app or digital system can surprisingly alter its course. The tech world’s willingness to harness its talent towards global efforts is commendable, but this time it may be better if, instead of trying to disrupt it, tech professionals will join hands with the existing healthcare system and support it.