An Epidemiological Investigation of Hollywood's Obsession With Pandemics

From proper pathogens to zombies, the entertainment industry produces an endless line of virus-related thrillers, serving as an x-ray of society’s collective fears

Around two weeks ago, it was first reported that the rapidly spreading coronavirus (Covid-19) affects patients’ sense of taste and smell. This tidbit immediately drew the attention of esoteric film buffs—they remembered seeing this movie before. In the 2011 romantic drama Perfect Sense, an epidemiologist encounters a patient who had lost his ability to smell due to a mysterious virus that soon spread, becoming a global epidemic. The virus gradually took away other human senses including taste and vision. This brought to mind another cultural piece concerning a global plague causing people to lose their eyesight—José Saramago’s 1995 novel Blindness, which was later adapted for film in the 2008 thriller of the same name.

In the past few weeks, demand for pandemic movies rose significantly on streaming services and television channels. Contagion and Outbreak—two of the most popular films of the genre—stand out due to their strong scientific basis, which makes viewing them now feel as creepy as watching the news. 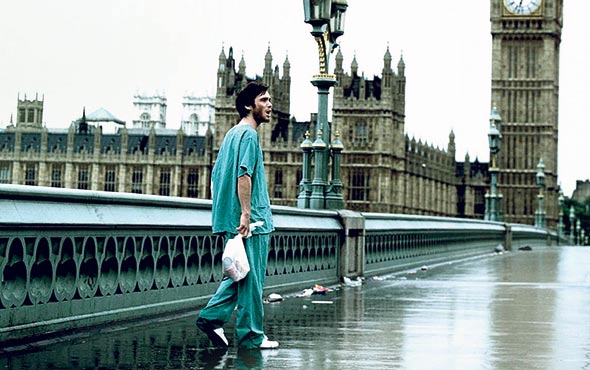 28 Days Later movie
There is another pandemic film sub-genre to look out for, however—those plots that come not from reality but from fantasy, containing less proper science and more science fiction. This type of film teaches us nothing about epidemiology, but functions more like a terrifying fable on human nature, examining what people would do under such extreme circumstances.

Many of the situations depicted in these films seem familiar now—social distancing, lockdowns, politicians using the crisis to remain in office, and, of course, the inevitable search for a reason—be it religious, moral, ecological, or social—for everything that is going on. When the heroine in Perfect Sense says that some blame the spread of the virus on capitalism, viewers in 2020 may feel, once again, the movie was written in and premiered this week.

For nearly 20 years, the most popular pandemic movies were zombie films, which is interesting because they started out as a different horror genre. In George Romero’s Night of the Living Dead, considered to have started the zombie trend in 1968, these creatures were simply dead people that have risen from their graves and roamed the earth in search of flesh to eat. In 2002, two films turned the victims of a virus into bloodthirsty monsters, bringing zombie movies into the realm of pandemic thrillers. The first such film was the video game-based movie Resident Evil whose heroine tries to survive while killing off as many of those infected by a genetically engineered zombie-making virus as possible. Six months later, Danny Boyle’s 28 Days Later was released in theatres. The film was written by Alex Garland—whose films Ex Machina and Annihilation will hopefully prove less prophetic—and revolved around a rage-invoking pathogen, causing those infected to turn violent and deadly. Even though the movie deals mainly with its protagonists' survival struggle, it also depicts quite accurately the spread of a global pandemic and what it does to the humanity of survivors. This film, as does its 2007 sequel, presents a Homo homini lupus worldview, suggesting people in extreme situations will forgo compassion and humane values. Despite the fact that some of the movie’s creepy imagery—including London’s deserted streets—seemingly came true, it appears corona-age humanity is showing opposite symptoms of generosity and social responsibility. At least for now. The strange similarity between fictional horror movies and the reality we live in was recently demonstrated by actor Will Smith, when he was a guest on his wife Jada Pinkett Smith’s Facebook talk show Red Table Talks. In the show, Smith attributed some of the disinformation revolving the coronavirus pandemic to his 2008 hit science fiction thriller I Am Legend. In the film, a virus wipes out most of the world’s human population, leaving big cities abandoned, to be taken over by nature—with grass growing through the pavement and wildlife roaming the street. The virus, in this case, turned those infected into vampires of a sort, hunting healthy humans for blood. Smith played a virologist that injected himself with an experimental vaccine, making him the last human to survive. As research, Smith said he visited the U.S. Centers for Disease Control and Prevention (CDC) to learn about the spread of pandemics. Everything they told him at the CDC is now happening, Smith said.
Related stories:
Pandemic films, like all horror films, are an x-ray of the collective fears of filmmakers and viewers alike and in the past decade have, on more than one occasion, presented an anti-liberal approach blaming scientists or environmentalists for destroying the earth. In 28 Days Later, for example, the virus is spread after animal rights activists release infected monkeys from labs that were experimenting on creating a vaccine. In I Am Legend, the virus is the result of a new cancer vaccine, making it a favorite among anti-vaxxers. On the bright side, however, both these films emphasize how impossible it is for a single person to survive on their own and how much better people do when they are working together. Before the September 11 terrorist attacks on the U.S., Hollywood was flooded with disaster films depicting the destruction of New York—by aliens, meteorites, or tsunamis—making the collapse of the World Trade Center towers feel more like a science fiction movie than like real life. The same is happening with the coronavirus, as if the anxiety spread by Hollywood about a global force of nature has manifested itself in reality and became a pathogen. So far, it seems we are not on the verge of the apocalypse and that humanity in the corona age is behaving itself way better in real life than it did in film. On the other hand, none of the films mentioned here had a happy ending.