Is the debate over the quantity and quality of Covid-19 detection kits yesterday’s news? More and more countries have realized that the majority of their populations will be infected by the coronavirus, and may indeed have already contracted the disease. Therefore, what is important now is to test for those who have developed antibodies to resist the disease, instead of continuing to rely on tests to identify active cases.

These tests, known as serology tests, make it possible to identify those who have already built up an immunity to the virus even if they are unaware that they had it. The significance is dramatic as it would enable the return to the active workforce and easing of quarantines for those who have developed antibodies and are no longer susceptible to infection. 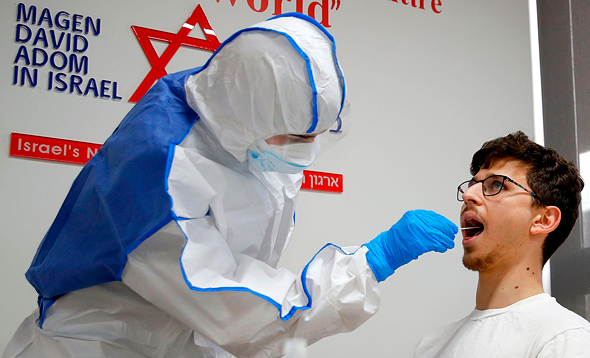 Coronavirus checkup (illustration). Photo: AFP
According to a recent Der Spiegel report, Germany plans to provide citizens with immunity certificates to ease shutdown requirements and enable people to return to their jobs. The German government aims to conduct hundreds of thousands of serological tests in the coming weeks, Der Spiegel reported. A similar plan is moving ahead in the U.K. through self-testing kits that will be sold in pharmacy chains. Calls are spreading for Israel to follow suit and carry out serological testing but several people close to the Ministry of Health who spoke to Calcalist on condition of anonymity said it is too soon to begin the pivot as there are too few people in the country who have already developed the necessary antibodies. Professor Eitan Friedman, a genetics expert from the Sheba Medical Center in central Israel, is spearheading the demand for the initiation of serological tests. “If serological testing by family doctors had been carried out, people who had already been exposed to the virus could return to work,” Friedman told Calcalist. Friedman is not alone. His calls are being echoed by some in Israel’s business community who are eager to see a return to routine productivity. One of the most prominent voices is serial entrepreneur and VocalTec Ltd. founder Elon Ganor. Ganor, who is a trained medical doctor and in the past launched biotech company Virovahl SA, told Calcalist that in the absence of serological testing, “any discussion of mortality rates is insignificant because we do not know how many people actually contracted the virus.” On Tuesday, American diagnostics company BioMedomics Inc. received a nod from the U.S. Food and Drug Administration (FDA), under relaxed conditions and without regulatory clearance due to the pandemic, to launch tests that can detect current or past exposure to the coronavirus within minutes. German laboratory diagnostics company EuroImmun AG received the European CE approval to produce similar tests days earlier. Serological tests are different from standard Covid-19 tests. For one thing, they do not require the famously hard-to-get swabs and instead rely on blood tests that detect the presence of antibodies. There are two types of serology tests. The first, like the one produced by BioMedomics, is a rapid test that provides an indication of the presence or absence of antibodies within 15 minutes. It is simple and widely available, but suffers from a relatively high error rate. The second type, like that developed by EuroImmun, takes longer and requires processing the samples at a laboratory. EuroImmun is represented in Israel by Biotest Ltd. “Our kits are more complicated and can measure the presence of antibodies in the blood, not just confirm their existence,” Harel Toder, Biotest’s CEO and a trained biologist, told Calcalist. “The kit must go to the lab and requires a three-hour procedure, but we can test up to 88 samples simultaneously,” he said.
Related articles:
Toder explained that the level of antibodies in the blood indicate whether the person tested is contagious or fully recovered. He noted that Biotest is in constant communication with several agencies in Israel, including some with links to the health ministry. “The kits are being examined by various agencies and I am convinced their use will be initiated in Israel very soon,” Toder said, going on to stress that there would be no delay in mass production of the kits even if very large numbers of them are in demand.