Shaul Olmert stresses that when it comes to young companies, the product vision is constantly subject to changes

TAGS:
One of my favorite pastimes these days is shopping at discount retail stores, office supply stores, and hardware stores and ask them to issue the tax receipt to “Flying Pigs Inc.” There’s no end to the amusing responses I get, with most ending with the frequent question “so, what the hell does your company do?” You may have asked yourself the same question if you’ve read this column before, and frankly, we—the company’s workers, can only provide a partial answer. I’ll give you a hint: We are not raising a litter of pigs and trying to teach them how to fly, perhaps only metaphorically. Our “policy of ambiguity” on the matter is not driven by fear that someone will steal our idea or that if it leaks, it will ruin the drama of the planned launch. Truth be told, we prefer to elegantly circumvent the issue of telling what it is the company does simply because it’s still too early to commit. Experience shows that over the course of the development process, the product changes, and often the version that goes to market is different--sometimes radically so—from the initial plan you set off with. It’s not just the product either: the business plan, the marketing method, the team structure, and more or less all aspects of the company undergo a transformation along the way, adjusting to shifting market conditions, to new competitors that appear on the scene, and the way in which clients use the product and the value they derive from it. 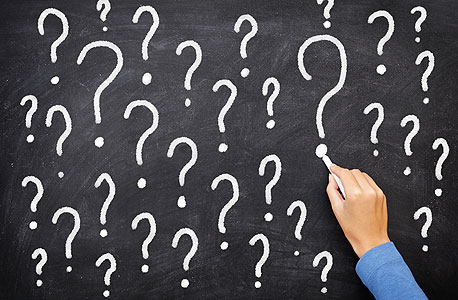 As a startup, you must never stop questioning. Photo: Shutterstock
In a previous column, I wrote about the overemphasis that is often placed on the idea behind founding a company, given that at such an early stage, it is often no more than a raw material that requires substantial processing. Because of that, many entrepreneurs are truly scared of people knowing what it is that their company is working on, fearing their idea will be copied. Sure, there have been cases like that and a certain degree of caution is sometimes warranted. Had Pepsi discovered that its longtime rival Coca-Cola was working on adding a new strawberry flavored soda to its product lineup, it’s reasonable that they too would allocate some R&D money to look into the feasibility of developing a similar beverage, meaning that the information is an asset that the company should seek to protect. However, in a dynamic market that is constantly changing, in which thousands of small and large companies are frequently changing their focus and tactics, the cost of exposing information is much lower. So why do we insist not to share with the world what it is we are working on? For the simple reason that we are still learning how to express it. It is safe to assume that if you were to interview me and my business partner Ilan separately, not to mention our additional six team members (Hi Maxi!), you would find that each one of us sees the company’s vision and product a little differently. When we encounter these differences as part of our routine conversations, we don’t try to convince each other, but mostly listen and try to understand what the other person imagines in their head. It is clear to all of us that at this stage the vision is still general, the product plan is in principle only, and that any decision we reach about the product’s first version, its supporting business model, and the operational structure that is required to meet it, is a temporary one that is subject to change and reshape depending on performance.
Related Stories:

In recent weeks, while most of the “Flying Pigs” team worked on writing code, product design, and other development aspects, I have spent a lot of my time meeting with the people our product is aimed at. Some express enthusiasm from the get-go and immediately recognize the potential. Others mumble polite compliments but end up admitting that it doesn’t connect with them and raise challenging questions regarding the need for it, its difference from existing solutions, and the ways in which we plan to market it. All of the feedback is a critical part of the process we are undergoing. I’ve noticed that when I begin the meeting by presenting the vision and sharing our goals, the people I speak to easily understand the product, but also provide feedback that is a lot more focused. Meanwhile, when I start by simply showing them the product (or more precisely the product plan and graphic visualization) they are less restricted in using the terms I use to describe it and tend to express their own unique take on it. That indicates to me that the product can be viewed in many different ways and attributed to different goals and use cases.

The multitude of feedbacks only stresses for me that we are still a long way off from being able to accurately define and describe the product and that until we reach that point we will have to hear a lot more feedback, adopt some of the suggestions, and slowly but surely, by a process of trial and error figure out how to properly answer the questions I started with — “so, what the hell does your company do?” Until then, stay curious!

The tech sector has expanded far beyond its techie core

Watch out Microsoft and Google, the Flying Pigs are ready to be outed
Recommended videos

Big-Tech 50 CEO: Most Israelis did not have access to join Israeli high tech until now

The UAE is a gateway for Israeli tech companies to expand to the Middle East, says Trackimo COO