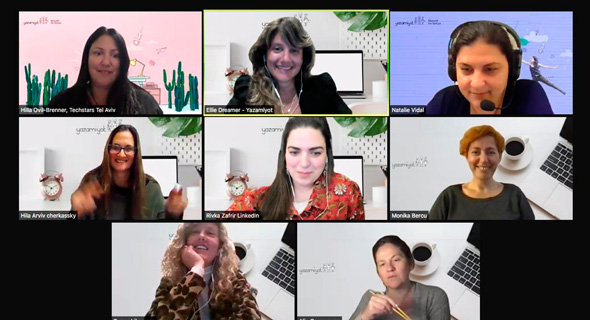 The Yazamiyot gang during the awards. Photo: Yazamiyot
Yazamiyot, a community celebrating Israeli female entrepreneurs, this week celebrated the new year with a special event that included celebrity guests and special prizers. Attended by comedienne Noga D’Angeli, members of the community took home prizes for categories such as: “Most Promising Entrepreneur of 2021,” “Most Promising Young Entrepreneur,” and “Community Favorite.”

The “Most Promising Young Entrepreneur'' award was given to Peech founder Danielle Dafne, whose company analyzes verbal content of video footage and edits it to short versions. “Community Favorite'' was awarded to Maya Otmazgin Ashkenazi, one of the founders of MAOLAC and MAO FoodTech.

As part of the prize, each winner took home 2,021 NIS ($634) from IBI, and some were gifted with a Google Home system from Google for Startups as well as some complimentary legal counsel from Shibolet & Co. Law Firm. Yazamiyot, Hebrew for female entrepreneurs, was established in 2012 by Hilla Ovil-Brenner. Today, it has more than 5,500 members who support each other in events, activities, and programs.