Israeli indoor-air management system company Aura Air presented 10 ambassadors of African countries with its indoor air purification and disinfection systems that fight bacteria and viruses, among them Covid-19. The presentation took place in a meetup hosted by Aura Air that focused on methods that can be implemented to tackle the spread of the virus which has raged across the world for more than a year.

The ambassadors of Ethiopia, Angola, Cameroon, Democratic Republic of Congo, Equatorial Guinea, Ghana, Nigeria, Rwanda, Mozambique, and Zambia attended the meetup. Following the presentation, the parties discussed how to apply the Israeli technology within their countries. 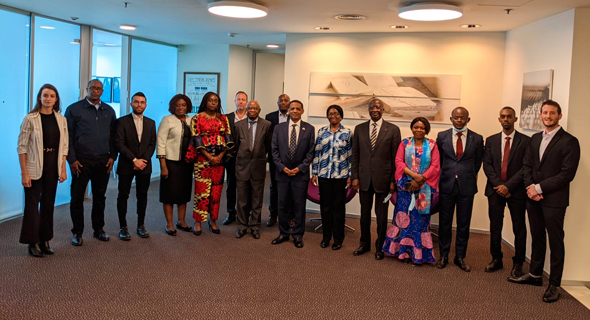 “Unlike Israel, many countries around the world are far from seeing the end of the Covid-19 era, and it's still necessary to find ways to maintain a routine that includes indoor activities under the current circumstances,” said Aviad Shnaiderman, the co-founder and CEO of Aura Air. “We've installed thousands of systems that contributed to saving lives around the world… We're happy to bring Israeli technological capabilities to countries in Africa as well and to assist them in the fight against Covid-19 and other diseases that are associated with polluted air.”

The system filters the air in closed spaces using four stages of filtration. Its main mechanism is based on AI technologies that compare indoor air with outdoor air quality, detecting positive or negative fluctuations and treating the air appropriately via an app. According to a study conducted by Sheba Hospital, the system can help eliminate a variety of viruses and bacteria at a rate of 99.97%. Today, Aura Air’s system is implemented in venues, schools, government buildings, and hotels in the U.S, Europe, and the Far East.

During the meetup, the ambassadors each presented the current state of air quality in their respective countries alongside the morbidity rates across the regions due to the virus. They all agreed that Ethiopia would serve as the base for a production line and innovation center for the training and presentation of clean air technologies that will then be extended across the continent.

Aura Air was founded in 2018 by Aviad and Eldar Shnaiderman, who serve as CEO and CTO. Its technology is based on patented and EPA-approved Sterionizer and Ray Filter to target and eliminate bacteria, viruses, fungus, or mold from indoor spaces. It has raised over $2 million and operates in 44 countries around the world.