Israeli cybersecurity company CyberArk, which focuses on privileged access management, has inaugurated its new R&D center in Beer Sheba, the largest city in the country’s Negev region. The center is located at the Gav-Yam Negev Tech Park, near the IDF’s new C4I Corps Park and Ben Gurion University.

“The opening of an R&D center in Beer Sheba is another step in CyberArk’ s long journey from a groundbreaking startup to a major global corporation that continues to grow with a place at the forefront of technology, protecting the sensitive assets of the world’s leading corporations,” Udi Mokady, CyberArk’s CEO and founder said. “The employees of the new center join the company’s general R&D organization. We are proud to make CyberArk’s Israeli innovation available to our global customers from Israel's capital of the Negev.” 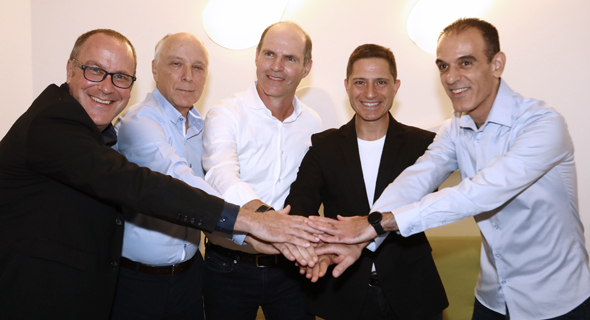 President of the Ben Gurion University of the Negev, Prof. Daniel Chamovitz; CEO of Gav-Yam Avi Jacobovitz, CyberArk’s founder and CEO Udi Mokady, CyberArk Beer Sheba Mayor, Ruvik Danilovich; and Chen Bitan - General Manager of CyberArk’s headquarters in Israel and CyberArk's chief product officer. Photo: Diego Mitelberg
The new center will be run by Shai Saffer, who served as VP R&D of CyActive before it was acquired by PayPal and he became the director of the payment company’s center in Beer Sheba. CyberArk, founded in 1999 and the second largest Israeli cyber company traded on the Nasdaq, plans to recruit 200 employees in Israel this year, 100 of whom will be programmers for its centers in Beer Sheba and Peteh Tikva. “CyberArk’s joining the high tech park of Beer Sheba is a global breakthrough for the city,” said Beer Sheba Mayor Ruvik Danilovich. “It will cement the status of the innovation campus. It is excellent news for other multinational corporations. We look forward to making the park a central employment hub in cyber, technology, and innovation.”

“CyberArk, one of the global cybersecurity leaders, is joining the Park’s thriving ecosystem alongside the National Cyber Directorate, IDF’s Cyber and IT organizations, dozens of high-tech and cyber companies, and the Ben-Gurion University,” added Yigal Unna, Director-General of Israel’s National Cyber Directorate. “We will engage in cybersecurity as a cohesive community. The entry of a company such as CyberArk’s is essential for reinforcing and establishing Beer Sheba as Israel's cyber capital.”

CyberArk has more than 6,700 corporate customers and helps them protect data, infrastructure, and assets against external attackers and malicious insiders in the cloud and across enterprise.

The Gav-Yam Negev Tech Park is a partnership between the public and the private sectors, comprising Ben-Gurion University of the Negev, Beer Sheba Municipality, Gav-Yam, and KUD. The park is expected to host 10,000 employees from more than 70 companies including Elbit, Taboola, Wix, IBM, and Rafael.