Append Medical announces a $7.4 million Series A to help with its first clinical trial

Append Medical develops the Appligator, a tool that is designed to reduce stroke risk in patients

Append Medical, an Israeli company that has developed an implantable device designed to reduce stroke risk in those suffering from atrial fibrillation, has announced that it has completed a $7.4 million Series A round. The round was led by an unnamed strategic company and MedTecX LP, as well as other investments matched by the Israel Innovation Authority. They will join current investors Boston Scientific, MEDX Ventures, and Intellectual Ventures.

“Append Medical brings an important innovation to the field of stroke prevention in atrial fibrillation patients”, explains Prof. Horst Sievert. “Its suture delivery system is the first ever to allow for the minimally invasive exclusion of the left atrial appendage leaving only a suture lasso behind and no implant.”

Append Medical develops the Appligator, a tool that is designed to reduce stroke risk in patients by excluding the LAA to prevent blood clot leakage with a minimally invasive transseptal intervention leaving no implant behind. 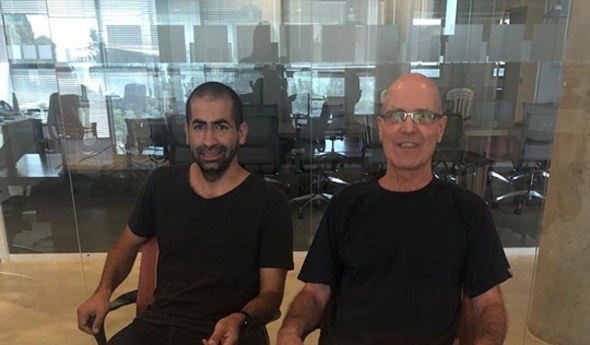 Shay Raviv and Apprend CEO Dr. Zachi Berger. Photo: MEDX
Developed based on the research of Professor Leonid Sternik from the Sheba Medical Center, the company was founded in 2017 led by Dr. Zachi Berger (CEO) with a Seed investment from the MEDX Xelerator, a Medtech incubator in Israel. “This round will enable Append to continue developing its technology towards a clinical product. We are thrilled to see the accomplishments of the team so far,” noted Shai Policker, CEO of MEDX Xelerator and Append’s Chairman.

“The growing problem of atrial fibrillation and the issues associated with anti-coagulants calls for innovation and we are happy to take part in supporting this important technology,” added Lifei Cheng, CEO of MedTecX.

The funding will help the company complete the development and performance of its first clinical trial. MEDX Xelerator is an incubator formed by MEDX Ventures Group with Boston Scientific, Intellectual Ventures’ Invention Science Fund, and Sheba Medical Center. Its portfolio includes Exero Medical, PatenSee, Swift Duct, and Dimoveo Medical, among others.