Margalit Startup City Galil – the International Foodtech Center, was launched today in the northern Israeli city of Kiryat Shmona. Upon its launch, Israel has now become the first country in the world to establish a center dedicated to Foodtech, a sector that has seen increased attention in recent years. The occasion was marked by an event that welcomed startups, multinational companies, entrepreneurs, investors, leading academic institutions, researchers, artists, and young innovators from the Galilee region.

“A big set of revolutions are coming together here in the Galilee,” JVP Founder and Executive Chairman Erel Margalit told CTech. “It’s the agricultural revolution and the technology revolution, which is part of a fusing to create the international foodtech center for Israel.” 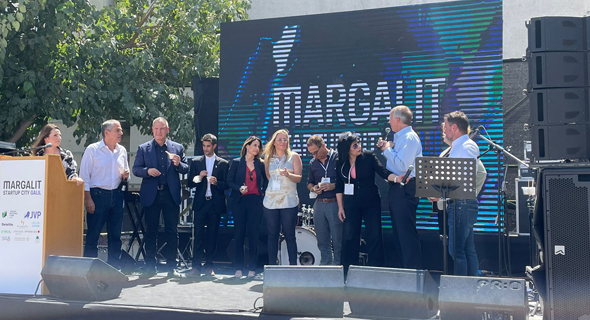 Erel Margalit and guests speaking at the launch event. Photo: James Spiro/CTech
The International Foodtech Center marks the official arrival of Galilee onto Israel’s high-tech scene and will join other local hubs seen in Tel Aviv, Jerusalem, Herzliya, and Haifa. It is understood that its location will be suitable for local and international researchers, and will bring together business and social entrepreneurs from Jewish, Arab, Druze, and secular citizens. In total, it is the fourth Margalit innovation center following cyber centers in New York, Be’er Sheva, and Jerusalem.

“If we don’t create a revolution in agriculture and in food in the next 20 years, the planet will not sustain,” Margalit told CTech. “You need alternative protein, smart agriculture, drip irrigation, different packaging in order to save the world, literally.”

The event saw the attendance of members from the Israeli government and the high-tech scene. In total, the two-hour event saw 14 startups in the Foodtech space presenting their ideas at ‘Foodtech Street’, round the corner on ‘Innovation Avenue’ saw a showcase of innovation projects from schools in the local area. Finally, ‘Interior Building’ saw a showcase of joint projects between multinationals.

CTech ate shawarma meat and schnitzel slices made from entirely protein-based and vegan alternatives, provided by a company called PlanTeam. All materials were sorted into trash cans that were collected by Save It, a company that helps businesses reduce their amount of waste from single-use plastics.

“When you give the Israelis some big ideas and you say it’s kosher to create startups around it, they will go wild. Just like they did with cyber,” Margalit concluded.

Russell Robinson, CEO of Jewish National Fund - USA said in the opening event: “From this day forward Kiryat Shmona should never be called a developement town, no, Kiryat Shmona and the Greater area of the Upper Eastern Galilee is part of the Culinary and Food industry capital of Israel. As we walked down the street with Erel Margalit and leadership and mayors of the area we knew, this is no longer a dream, this is the reality."