The company, which has developed an AI-powered financial platform for small businesses, said it has crossed a $100 million annual revenue run rate and experienced new customer acquisition growth of over 200% thus far this year

Israeli fintech company Fundbox, which had developed an AI-powered financial platform for small businesses, announced on Tuesday that it has closed a $100 million Series D funding round at a valuation of $1.1 billion. The company’s $200 million Series D was completed in 2020 at a $700 million valuation. This latest round was led by Healthcare of Ontario Pension Plan (HOOPP), joined by existing investors Allianz X, Khosla Ventures, and The Private Shares Fund, and brought in new investors including Arbor Waypoint Select Fund and a suite of BNY Mellon funds managed by Newton Investment Management North America.

The financing was driven by the company crossing a $100 million annual revenue run rate and new customer acquisition growth of over 200% thus far this year, as well as Fundbox’s platform expansion into payments. 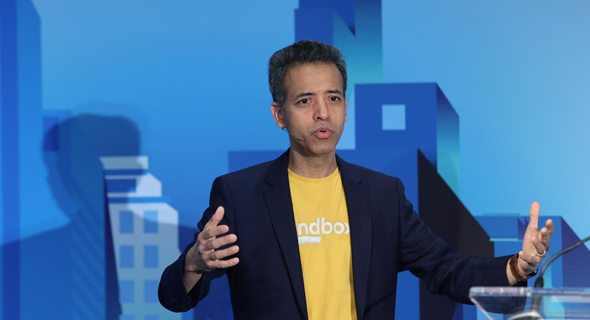 Fundbox CEO Prashant Fuloria. Photo: Orel Cohen
The company fired 15% of its employees and cut salaries when Covid-19 first hit, but has recovered successfully since. “We currently have 150 employees in Israel and 300 worldwide and we will be increasing our workforce by 50%-100% over the next two years,” said Dror Yosef, GM Israel and CTO at Fundbox. “We didn’t suffer from a significant slowdown during the fourth wave of the pandemic and we still don’t know what impact a fifth wave will have should it happen. We are predicting that the number of businesses opening in the U.S. over the next year will continue to grow.” Earlier this year it was reported that Fundbox was inquiring regarding the possibility of going public via a SPAC merger. Yosef added that “over the past year-and-a-half every company of our scale looked into SPACs, but that isn’t something that is currently on our agenda. We are focused on the company’s growth. The past year was very interesting and successful. We helped small businesses in the U.S. to reignite their activity.” Founded in 2013 by Eyal Shinar, who served as its CEO until last year, Yuval Ariav and Tomer Michaeli, Fundbox offers credit solutions to small and medium-sized businesses. Since Shinar switched to the role of chairman, the CEO position has been filled by Prashant Fuloria. Fundbox said that it has surpassed $2.5 billion in transaction volume and connected with over 325,000 businesses since its founding in 2013. As a next step towards building a comprehensive suite of financial tools that serve the needs of small business owners, Fundbox also announced that it is expanding its product platform and moving into payments with the launch of Flex Pay. Flex Pay is designed to provide small business owners with additional payment options and flexibility for business expenses. Repayment options include a bank account, credit card, or Line of Credit draw, providing small business owners with another tool to buy now, pay later.
Related articles:
"Fundbox is primed for continued growth as we approach a once-in-a-decade opportunity to drive the recovery and expansion of the small business economy,” said Fundbox CEO Prashant Fuloria. “The addition of Flex Pay to our product offerings is critical as small business owners look to utilize buy now, pay later solutions for business. We remain committed to leveraging our superior AI, data-native approach, and small business insights to solve working capital needs and power the resurgence of the small business economy.”