“My challenge at SoftBank is to find the next unicorn,” says former Mossad chief, Yossi Cohen

“Since my appointment SoftBank has made many changes that are relevant to the Israeli market. We thought that creating a massive presence in Israel would be the right thing to do. So in addition to the funding, I feel that the fact that we are building SoftBank Israel is a very important development for Israel’s economy,” said Yossi Cohen, the former Mossad chief and SoftBank’s new head of investment advisers, talking to Calcalist Editor-in-Chief Galit Hemi during Sunday’s Unicorn Forum organized by Calcalist and Discount Tech.

Cohen added that he has been busy holding numerous meetings since starting his new position. “When SoftBank comes to Israel a lot of people want to get in touch,” he noted. “Beyond that there is also the matter of trying to map the Israeli economy, understanding the technologies being developed and meeting with Israeli banking and accountancy. This is why we are currently recruiting a team in Israel. We are in the process of interviewing analysts and our exams are tough, which means our day starts early in the morning and ends like before with conversation late into the night, this time with Japan.” 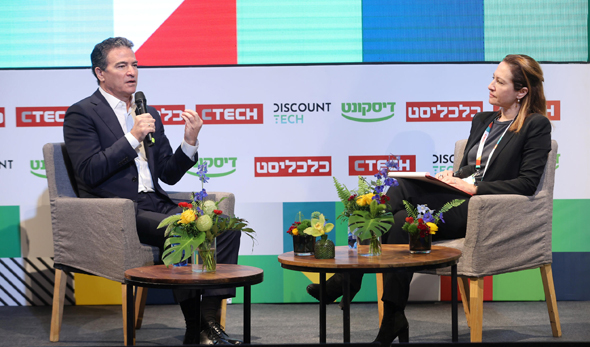 SoftBank head of investment advisers Yossi Cohen (lefT) and Calcalist Editor-in-Chief Galit Hemi. Photo: Orel Cohen
Cohen broke down SoftBank’s expectations from him. “The expectations defined to me by SoftBank were to be present in Israel in a significant manner. We need to know about almost every Israeli tech company, even an early-stage startup, so that we understand the market and can make the right investment decisions. I have set us an additional challenge - knowing who will be the next Israeli unicorn.”
Related articles:
Cohen said it remains difficult to determine whether there is currently a bubble in tech. “There is a global understanding, and SoftBank sees this, that there is a growing need for advanced technologies. Bill Gates said that it was fortunate the pandemic happened now when we have these technological capabilities because five years ago for example we would have been unable to all talk on Zoom. Israeli companies are no longer just seeking an exit, but want to succeed and become big and leading companies.”